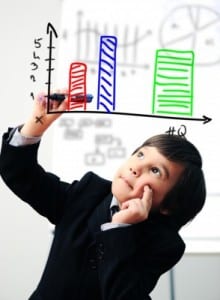 If you’re the parent of a child on the Autism Spectrum, you’ve likely noticed a special gift that your child has. Maybe they’re really good with numbers, fascinated with angles or reptiles, or maybe the words “musically inclined” don’t come close to describing your child. Whatever that special gift, parents may be surprised (or not so surprised) to learn that these same skills can be found in prodigy children. What’s even more interesting is that a new study suggests there is an even deeper link between autistic children and genius children.

Published in the medical journal, Intelligence, the study looked at eight child prodigies, six males and two females. The group of geniuses included a math prodigy, an art prodigy, four musical prodigies, and two prodigy children who switched subjects (one from music to cooking, the other from music to art). Found through television specials, the internet and referrals, all of the children met individually with researchers. During that meeting, they were given the Stanford-Binet Intelligence test, a test that contains sub-tests on knowledge, working memory, quantitative reasoning, visual spatial abilities and fluid reasoning. The children were also given the Autism-Spectrum Quotient assessment, which measures autistic characteristic levels.

Upon assessment, researchers also determined that three of the child prodigies qualified for an autism spectrum disorder diagnosis. Prodigy children were also found to have moderately elevated scores of autistic traits when compared to a control group of 174 adults, all of which were recruited by mail. Even more interesting is that half of the prodigy children had a family member or close relative on the spectrum. Because of the small number of children in the group, this is highly unlikely since only about 1 in 120 people are diagnosed with the disorder. (It should be noted that current statistics say that 1 in 88 children are diagnosed with the condition today.)

“The link between child prodigies and autism is strong in our study,” Joanne Ruthsatz, lead author of the study and assistant professor of psychology at Ohio State University’s Mansfield campus told Medical News Today. “Our findings suggest child prodigies have traits in common with autistic children, but something is preventing them from displaying the deficits we associate with the disorder.”

Results also determined that, while there are some similarities between autistic children and child prodigies, there are also some differences. Child prodigies scored higher on the subset that measured attention to detail when compared to the control group and the Asperger’s group. However, the children who scored an autistic diagnosis were not those that scored highest on the attention to detail section.

“Overall, what we found is that prodigies have an elevated general intelligence and exceptional working memory, along with elevated autism score, with exceptional attention to detail,” Ruthsatz said.

Researchers are unsure why child prodigies display traits similar to those of autistic children, but they suspect that genetic mutation may enable prodigies to excel in their talents but avoid the shortfalls commonly found in autism. Ruthsatz suspects that child prodigies may even have some slight version of autism.

“While autistic savants display many of the deficits commonly associated with autism, the child prodigies do not,” she said. “The question is why?”