Home » Study: Children with Televisions in Their Bedrooms at Higher Risk for Obesity 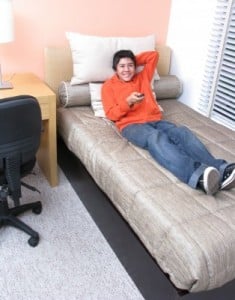 Obesity affects approximately one-third of all U.S. children between the ages of 8 and 18. Recent statistics have estimated that the average U.S. child watches 4.5 hours of television per day. Approximately 70% of those children have televisions in their rooms. Looking to see if there may be a correlation between the two, researchers at Pennington Biomedical Research Center in Baton Rouge, LA recently studied 369 children and teenagers between the ages of 5 and 18 noting their BMI, gender, age and ethnicity. The team assessed the children on fat mass, stomach fat, glucose levels, waist circumference, fasting triglycerides, resting blood pressure and high-density lipoprotein cholesterol.

After looking at the data, researchers found that children with televisions in their bedrooms were at a higher probability for viewing more television. In addition, those with televisions in their rooms had a higher waist circumference, more fat and more subcutaneous adipose tissue mass. They were also three times more likely to have a higher waist circumference, high cardiometabolic risk and elevated triglycerides.

Researchers also found that those with televisions in their rooms who watched more than two hours of television per day had 2.5 times the odds of having the highest levels of fat mass. Those that watched television more than five hours per day doubled their chances of being in the top quartile for visceral adipose tissue mass.

“There was a stronger association between having a TV in the bedroom versus TV viewing time, with the adiposity and health outcomes,” lead author peter T. Katzmarzyk, PhD told Medical News Today. “A bedroom TV may create additional disruptions to healthy habits, above and beyond regular TV viewing. For instance, having a bedroom TV is related to lower amounts of sleep and lower prevalence of regular family meals, independent of total TV viewing time. Both short sleep duration and lack of regular family meals have been related to weight gain and obesity.”

To make matters worse, former studies have indicated that the amount of television a person views as a child continues on into adulthood. This puts children at a long-term risk for being overweight, which can lead to other health conditions, such as high cholesterol.