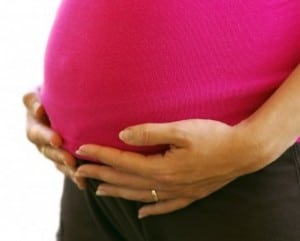 Over the years, impatient babies have started their own “mile high club” of sorts. They’ve decided that, rather than wait until their mothers land safely on the ground, they’d much rather be born up in the air. But this is the only significant risk to pregnant women who wish to fly, a recent study says. And for that reason, many mothers may fly a little less stressed.

Many moms-to-be voice their concerns over flying. After all, there are some strange yet predictable changes going on with their bodies, and the act of flying comes with a number of environmental and physiological changes, including a reduction in the partial pressure of oxygen during flight. But they needn’t be concerned, experts from the Royal College of Obstetricians and Gynecologists say, as long as they aren’t in their last few weeks of pregnancy.

But it’s not complications, per say, that the researchers are concerned about. It’s actually the fact that limited (if any) medical staff is available while aboard the plane. Should an obstetric emergency occur (such as a baby deciding he or she isn’t willing to wait), there may not be anyone trained enough to assist, which could put both mother and baby at risk. However, researchers say they were unable to find any other significant risks for pregnant women in flight.

“For uncomplicated pregnancies, there is no reason to give advice against air travel, and specifically there is no issue with travel in early pregnancy as the main consideration is risk of labor,” Professor Ian Greer, University of Liverpool and author of the paper told Health Canal.

There are, however, a few unique circumstances that should be considered. For example, they physiological changes that occur during flying could trigger health conditions, like motion sickness, in the mother, which could further exacerbate common pregnancy symptoms like morning sickness. Additionally, all of that sitting does put the mother at a slightly elevated risk for developing a deep vein thrombosis (DVT).

Though all mothers could be at a slight increased risk for developing a DVT, those that warrant the most concern are those that are planning to fly 4 hours or longer and those with significant risk factors for DVT (e.g. previous thrombosis or morbid obesity). In these situations, treatment with low-molecular-weight heparin and graduated elastic compression stockings should be considered to help reduce the risk. Researchers also noted that these precautionary measures may need to be taken the day of, or even several days after the flight.

“While the risk of developing a DVT in flight varies, depending on the individual’s risk factors, it is a concern of most pregnant women, and there is reasonable evidence to support the use of graduated elastic compression stockings to reduce this risk further,” Greer said.

Additionally, women with high risk pregnancies – such as those that have miscarried previously, suffer from severe anemia, have recently suffered from hemorrhaging, suffer from serious cardiac or respiratory diseases, or have had recent bone fractures – should discuss their wish to fly with their doctors (as should all pregnant women). In some cases, it may be possible to do an ultrasound scan prior to the scheduled flight to ensure that all is well with the baby and mom.

“However, if the woman has a history of miscarriage or ectopic pregnancy, it would be sensible to suggest ultrasound prior to travel to confirm the location and viability of the pregnancy,” Greer said.

Otherwise, the study ruled out other common concerns involving flight travel during pregnancy. Even body scanners, which use ionizing radiation for security checks, were found to have a dosage level too low to be considered a substantial risk.

So, for the most part, it seems that pregnant women can fly with very little concern. Just don’t forget to discuss your plans to fly with your doctor.

“This paper highlights the main concerns of pregnant women when it comes to commercial air travel and is a useful source of information for obstetricians to be aware of the conditions that may complicate a pregnancy,” Professor Richard Anderson, Chair of the Scientific Advisory Committee told Health Canal. “Women with any concerns about flying during pregnancy should seek advice from their obstetrician or midwife.”