At 12 months of age, most children receive an MMR (measles, mumps, rubella) vaccination. This weakened version of the real virus can produce fever and other flu-like symptoms that can peak around 8 to 12 days after the injection. But according to a recent Ottawa study, parents shouldn’t worry when these symptoms are present. In fact, if anything, they should view it as a good sign. 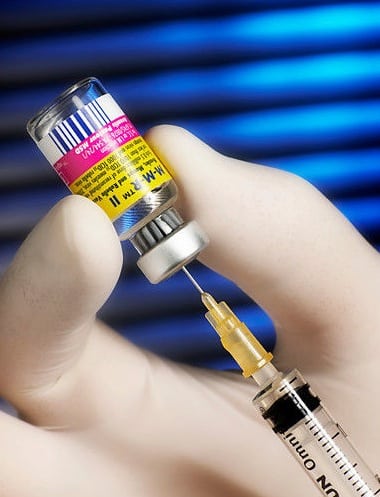 “This is the vaccine working,” says Dr. Kumanan Wilson, lead author of the study and researcher at the Ottawa Hospital Research Institute.  “It’s expected and necessary. This is the immune system working.” Through their study, however, researchers found that many parents are worrying.

A drastic increase in emergency room visits were cited for children that had received the initial MMR vaccination. The increase peaked at about 8 to 12 days after the shot. Children who had received the booster shot, however, were not likely to visit the emergency room. According to the researchers, this is likely due to the fact that the first shot generally produces the greatest response.

No increases were found in the number of hospital administrations for the same children, however. This indicates that, while symptoms were present, they were not severe enough to alarm physicians.

Dr. David Scheifele, a pediatric vaccine expert at B.C. Children’s Hospital in Vancouver says that he wasn’t surprised by the findings. He did say, however, that these findings signify that health care workers need to do a better job at informing parents of the adverse, but normal, side effects.

“I think providers could probably do a better job describing what parents ought to expect, so when kids do develop fever in the second week, they don’t panic,” he said.

Wilson says that he thinks that the lack of parent education and increased ER visits might even have something to do with the anti-vaccination movement; a movement that he says could be very dangerous.

“The MMR vaccine is a very important vaccine. Measles is a highly infectious condition and you need a highly effective vaccine. And the MMR vaccine has been proven to be highly effective. And it’s been proven to be very safe. But we know people are quite anxious about this vaccine,” he says. “This may be contributing to a willingness to believe that the vaccine may be causing other problems which it has not been shown to cause.”

In regards to “other problems,” Wilson is referring to claims that there is a link between the MMR vaccine and autism. Multiple studies have been conducted, however, to determine if any links between the two conditions exist. To date, no link has been found.

Parents should talk with their doctor if they have any fears or anxieties about childhood immunizations. While they may seem unnecessary, many of the illnesses they prevent can lead to serious health complications and even death.