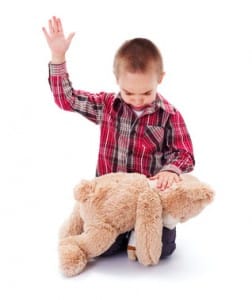 Spanking isn’t a new concept in parenting, but is this ancient method of discipline even effective? While there are still many parents who defend their decision to use spanking as a form of behavior modification, more and more studies are suggesting that spanking, at best, is ineffective. At worst, it does harm to the child, which is what a recent study from Columbia University in New York is saying.

“There’s just no evidence that spanking is good for kids,” Elizabeth Gershoff, who studies parental discipline and its effects at the University of Texas in Austin but wasn’t involved in the recent study, told Reuters Health. “Spanking models aggression as a way of solving problems, that you can hit people and get what you want.”

The new study suggests that Gershoff is spot-on with her opinion.

Collected from 20 different U.S. cities, Michael MacKenzie and his colleagues from Columbia University in New York analyzed the data on about 1,900 kids born between the years 1998 and 2000. Parents of those children were surveyed when the children were three and five years old about whether they spanked or not, and how frequently.

At the age of nine, researchers surveyed the mothers regarding any behavior problems displayed in their children. Children were also given a vocabulary test at that time to assess their vocabulary knowledge. What they found just might shock you.

When spanked by their mothers at the age of five, children were more likely to display aggression, regardless of how frequently they were spanked. In addition, children spanked by their fathers at age five tended to score lower on vocabulary tests at the age of nine. Granted, the difference was slight (four points lower), and there was no way for the researchers to truly determine if spanking were the cause. However, Gershoff says it might hold some relevance.

“I don’t think that spanking makes kids stupider,” she said. But it’s possible that parents who spank aren’t talking to their children as often, which could translate into a lower vocabulary. Or, it’s also possible that, because they are suffering from behavioral issues, they aren’t able to focus in the classroom as their peers.

So, if there’s all this evidence against spanking, why do parents continue to do it? More importantly, why do they continue to defend it?

MacKenzie has his own theory on that:

“It’s strongly associated with immediate compliance,” he said. “Children will change their behavior in the moment.”

To make matters worse, there’s very little in the way of what DOES work long-term for children, which can leave parents feeling frustrated, confused and at a loss when it comes to disciplining their children.

“The techniques that are designed to promote positive behaviors…often times take more effort and time to put into place,” he said.

Personally, we’ve tried a number of discipline methods with our children – we have had about 15 years and five children to practice on, after all. What we’ve found is that each child is a little different; what may work for one may not work for another. What’s more, positive reinforcement is more effective than discipline – but during those times that discipline is required, we do our best to present our children with logical consequences (as close to real life as possible) for their poor decisions.

What works best for you and your children? Do you feel that what you use to discipline your children will be effective in the long-term? Why or why not? We’d love to hear your thoughts.