Vitamin D, otherwise known as the “sunshine vitamin,” is essential for healthy bones, teeth and immune system. But there may be another benefit to Vitamin D, and it’s one that expectant mothers may want to be mindful of. A recent study of 678 children linked higher levels of exposure to vitamin D while in utero to a stronger grip at the age of four. 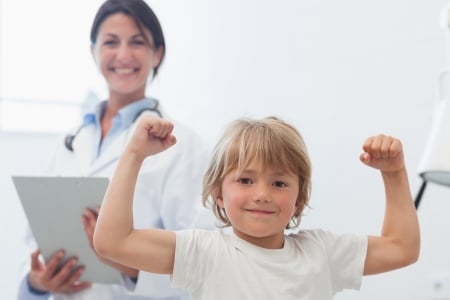 Published in Endocrine Research, the study looked at blood samples of mothers during their 34th week of pregnancy. Vitamin D levels were measured and then recorded. At the age of four, the University of Southampton researchers checked the grip strength of the children by placing a special device in their hands.

According to the research team, results linked higher levels of vitamin D during the last stages of pregnancy to a stronger grip at the age of four. For this reason, they concluded that the children may have greater muscle strength when their mothers receive adequate vitamin D exposure during pregnancy.

According to Dr. Harvey, there may be long term benefits to this improved muscle strength, including benefits that may extend on into adulthood.

“It peaks in young adulthood before declining in older age and low grip strength in adulthood has been associated with poor health outcomes including diabetes, falls and fractures,” he said. “It is likely that that the greater muscle strength observed at four years of age in children born to mothers with higher vitamin D levels will track into adulthood, and so potentially help to reduce the burden of illness associated with loss of muscle mass in old age.”

The Southampton researchers are following up their study with a trial on 1,200 expectant mothers. They are being given higher doses of vitamin D supplements to see if it will have an impact on the bone and muscle strength in their offspring later on down the road.

“This work should help us to design interventions aimed at optimizing body composition in childhood and later adulthood and thus improve the health of future generations,” Professor Cyrus Cooper, from the Medical Research Council Lifecourse Epidemiology Unit, who was not involved in the study, told BBC News.