Home » Talking With Your Kids About the Crisis in Japan 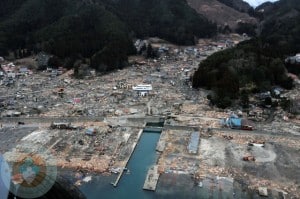 Japan has suffered through an unprecedented week.  The trifecta of misery, the Japanese people are enduring, has produced an endless stream of frightening images, accompanied by news reports punctuated with incendiary buzz words like ‘nuclear disaster’ and ‘meltdown’.

Combine video clips of swaying skyscrapers, and rushing water carrying debris like cars and houses (stuff that should never be floating), with reports of displaced and frightened people, loss of infrastructure, lack of essentials and never ending updates from the nuclear reactors and you have a stage set to unsettle even the most unflappable adult.

As parents, we are struggling to make sense of the compounding disasters that have crippled Asia’s largest economy.  How do we begin to explain these events to our children?  By now, most kids know something’s up.  It’s hard to get away from the barrage of information and it is easy for children to become overwhelmed and anxious.

Organisations like Kids Helpline, see an increase in calls at times when media focus is on disaster.  Wendy Protheroe, general manager of Kids Helpline in Australia believes that parents should limit the amount of media coverage their children are exposed to, so they don’t become overwhelmed but, “Don’t pretend that it isn’t happening.  Let them (children) know they are safe.”

Protheroe said, “If you say it is in Japan, it is important to make that real for them…”  Give children some idea of where Japan is.  Show them on a globe or a map, or explain how many hours it would take to fly there.

“For them it is happening in their street, in their home,” Protheroe explained.  “For kids it is important to let them know that it is a long way away and that it is not going to happen to them.”

Protheroe encourages parents to be prepared for questions and don’t be ‘too busy’ to answer.  Gear responses to the child’s age, “If a child is in primary school you could talk about earthquakes and how the plates of the earth move.  For smaller children you could say, ‘I don’t know why it is happening, the earth is changing.’”

By addressing a child’s questions and concerns we can hope to avoid the confusion and anxiety caused by vicarious trauma.

Vicarious trauma comes from witnessing someone else’s hardships and is a function of empathy.  The symptoms of vicarious trauma are similar to the symptoms of first hand trauma and include: anxiety, feelings of helplessness, anger, fatigue and emotional exhaustion.  You may notice your child experience a change in sleep, eating patterns, headaches and nausea.

World Vision is a humanitarian organisation that has responded to catastrophes all over the world.  They have had a presence in Japan for over 20 years.  In 1995, World Vision helped in the aftermath of the Kobe earthquake and now their staff is on the scene in Sendai, helping to administer relief.  They have some tips for parents attempting to address these heavy topics with their children.

First, listen to your children to find out how much they already understand and debunk any misinformation that may have filtered in.  When you answer questions, be clear and uncomplicated.  Keep your responses age appropriate and don’t pretend to know the answer if you don’t.  Do some research, when possible and help your child make some sense of the situation.

Don’t overexpose your children to the media coverage as, they explain, little ones are easily traumatized.  Being bombarded by excessive details and images may be more than a young child can process.

When talking about the tragedy with your children, keep your focus on fostering a sense of safety and security.  Watch for indications that your child is worrying excessively.  Give them creative outlets, like drawing, to help them work through their feelings and process the information they have taken in.

If you plan to donate to an organisation that is helping the people of Japan, let your child be involved in your giving.  Taking action, even in a small way, may help alleviate some of the anxiety they are experiencing.

The people of Japan are weathering their troubles with stoicism and dignity.  Children benefit when the adults around them model the same calm demeanour.  Avoid the temptation to be drawn into the mayhem of conflicting reports and media sensationalism.  By honing your own media savvy and doing your homework, so you can filter through the misinformation and incomplete opinion pieces, you will be better equipped to model a compassionate and moderate response for your children. – Jen R, Staff Writer