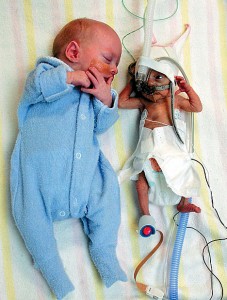 Byron and Lincoln Ryman were born within a minute of each other, firstborn Byron – at 3lb 6oz a small baby himself – was precisely three times bigger than his sibling.

Eleven weeks premature, both boys were given a slim chance of survival – particularly Lincoln, weighing only 1lb 2oz at birth.

But yesterday the pair, now just over five weeks old, were doing well, thanks to the dedicated staff at the Royal Hospital for Women in Sydney.

Lincoln has gained 10oz, while Byron has added 2lb 8oz.

“When the doctors took an ultrasound and saw that Lincoln had stopped growing in the womb, he was given very little chance of survival,” relieved mother Nicole Ryman said yesterday.

“But now I have two little boys who are doing well. I’m so happy.”

Neo-natalist Dr Parag Mishra said Mrs Ryman was induced to give birth at 29 weeks because it was seen as giving the babies the best chance of survival after complications arose.

“Nicole was 15 weeks along when the medical staff detected twin-to-twin transfusion, a type of problem that occurs sometimes with twin babies when blood flows from one twin to another.

“Lincoln’s chances of survival, I considered, were less than 30 per cent because he was so small.”

But after their birth, both brothers showed an “exceptional will to live,” said Dr Mishra.

“Lincoln initially had a lot of breathing problems and then he had heart problems, so an operation was carried out when he was still about 600g (1lb 5oz).

“But Byron also needed a little bit of help with his breathing before he began to gain proper weight and now he is doing well.

“We’re now watching both boys carefully, particularly little Lincoln, but we hope that he’ll soon start gaining weight much more quickly and get nearer and nearer his brother.”

For Mrs Ryman, 31, and her husband Todd, 32, who conceived through IVF, the first weeks of parenthood have been testing. Mrs Ryman admitted: “It has been a really up and down experience for us but now we’re on top of the world because we didn’t think we were going to have both of them.

“We’ve had a few scares along the way but they’re going pretty well now and I know I’m going to be able to take them home soon.

“During the pregnancy the doctors wrote Lincoln off. But he’s a big boy now – comparatively. They’re both fighters.

This is a story that anyone hoping to become pregnant should read. A doctor can only give you his educated opinion on what is happening inside your body. We learn time and time again that some babies have different plans.

Lincoln may of been smaller than his brother in utero, but he has a fighting spirit that will not give up. It’s a good thing that the doctor didn’t talk this mom into reducing because he was so small.