Boy, the Beckhams are one nice looking family!

David Beckham and wife Victoria were photographed this evening with their boys Brooklyn, Cruz and Romeo arriving at the BBC Sports Personality Of The Year 2010 Awards at the LG Arena in Birmingham, England. 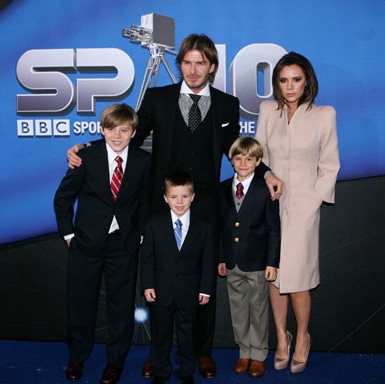 Victoria and the boys were on hand as David was awarded the Lifetime Achievement Award.

In an emotional speech, he thanked Victoria and their sons for their support over the years.

He said: “Of course, I want to thank my wife and my children. Not only has she given me three amazing boys but the support she’s given me and she is truly and inspiration for me every single day. So Victoria, Brooklyn, Romeo and Cruz – thank you.”

While host Gary Lineker gave David a couple of seconds to recover, he had some nice words to say about the soccer player,

“I would just like to say congratulations to David. He is a very very pleasant person and a good man and he deserves everything that has been said of him tonight.”