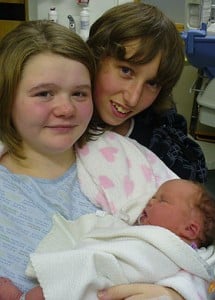 April Webster and Nathan Fishbourne have become famous in Britain as the country’s youngest parents. Both only 14, the pair welcomed in a healthy baby one month ago and are now facing the challenges of parenthood at a young age.

April and Nathan became sexually active when they began dating last September, While both were still 13, they soon found themselves with a baby on the way and a huge change to their lives.

Determined April said: “Jamie wasn’t planned, but I’m going to be a great mum for him. He’s perfect and I’m going to give him everything he ever wants.”

Nathan said: “I’m happy being a dad. When I see Jamie I do things for him, like any dad. I help change him and stuff.”

Right now, the baby and April live with her parents, who help care for them both. The birth of the child has brought huge changes between the teens, but Nathan is hopeful to be a part of his child’s life still. Despite their young age, the parents are trying to care for their child as best as they can.

The baby, Jamie, was born by c-section on November 15. He was born with a a malformed oesophagus that required surgery and an extended stay in the hospital to fix. Now, though, he is home with his mom and family. April shares a room with her older sister, who helps her feed and care for Jamie as well.

The parents of the young teens were both shocked y the pregnancy, but stayed supportive and let their children make their own decision in this.

Dad Jeff, a 38-year-old cabbie, added: “April’s still my little girl and now she’s got a little baby. She’s already doing so much for Jamie. We’re really proud at how she has taken to motherhood.” Jeff said he felt no hostility towards Nathan, adding: “It takes two to tango.”

April left school when she was 16 weeks pregnant and is continuing her education at a special “young mums” centre. Neither knows what the future will hold for their young family. – Summer, staff writer