Home » The World of Eric Carle Squeaks and Crinkles 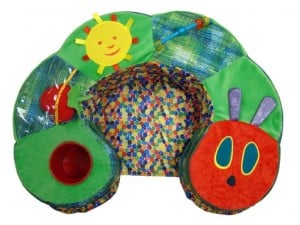 Just in time for the 40th anniversary of The Very Hungry Caterpillar, Eric Carle has teamed up with Kids Preferred to introduce a line of developmental toys for babies and kids.

The themes of Carle’s stories are usually drawn from his extensive knowledge and love of nature — an interest shared by many small children. Besides being beautiful and entertaining, his books always offer children the opportunity to learn something about the world around them. Thanks to Kids Preferred, those literary characters – Caterpillar, Elephant, Lion, Ladybug, Penguin, Frog and friends – leap from Carle’s storybooks to the hands of a new generation of Eric Carle fans.

This collection incorporates many tricks to keep a baby interested. Kids Preferred uses bright fabrics to cover rattles, squeakers and chimes. Their eclectic mix of patterns are both eye catching and very soft to the touch.

A couple that have quick became favorites my little man are the Apple Playset and Caterpillar teether.

The peekaboo apple is filled with plush fruit that squeak, rattle and crinkle. They also must feel good on the gums because Mr.Teething also loves to chew on them while playing. The best part: the stuffed Caterpillar ‘eating’ through the apple. Too cute!

Here are is a preview of the rest of the collection: 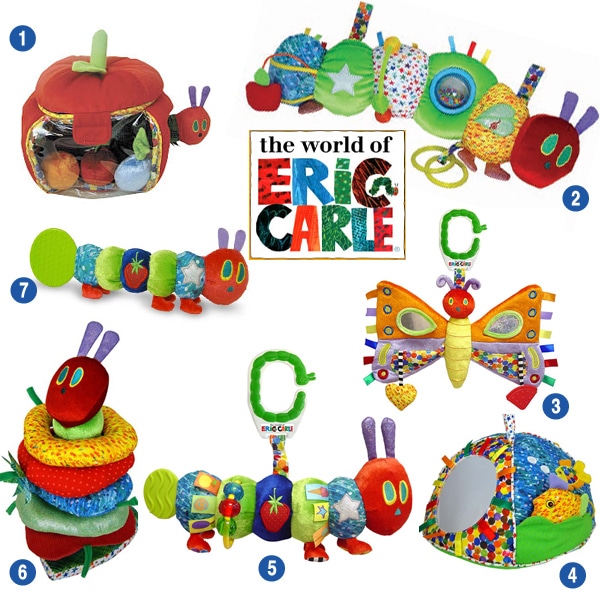