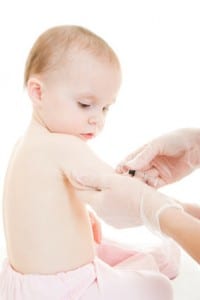 As with any vaccination, there are risks involved with the measles vaccine. The most common include fever and febrile seizures. These risks can be reduced, however, according to a new study that was published in JAMA Pediatrics. The key, researchers on the study said, is in the timing.

According to the recommendations from the Centers for Disease Control and Prevention (CDC), children should receive their first measles-containing vaccination at 12-15 months of age, and a “booster” should be given between the ages of 4 and 6.

“We found that the magnitude of increased risk of fever and seizures following immunization with measles-containing vaccines during the second year of life depends on age,” Dr. Ali Rowhani-Rahbar, from the University of Washington’s Department of Epidemiology and lead author of the study, told Medical News Today.

Rowhani-Rahbar and colleagues from the CDC and nine managed care organizations came to this conclusion after pulling data from the Vaccine Safety Datalink on a total of 840,348 children between the ages of 12 and 23 months, all of which had received a measles-containing vaccine between 2001 and 2011. Researchers then evaluated the potential modifying effect of age on the risk of fever or seizure after immunization using different combinations of measles-containing vaccines (MRV vaccine vs. MMR vs. MMR+V).

According to the results the overall incidence of fever or seizures were highest in all age groups at 7-10 days after vaccination. However, for children in the 16-23 month age range, the occurrence of fever seemed to be significantly higher than in all other groups. In regards to seizures, the occurrence seemed to be highest in the 16-18 month age group.

“While measles-containing vaccines administered at 12-15 months of age are associated with a small risk of fever and seizures following immunization, delayed administration at 16-23 months of age results in a greater risk of those adverse events,” Rawhani-Rahbar said.

In addition, febrile seizures were still found to be the most common adverse effect following a measles-containing vaccination. However, the risk is still small, the authors said, regardless of age.

Improved vaccinations have dramatically reduced the number of people contracting measles – by more than 99%, according to the CDC. However, the condition is still common in other countries, particularly those that have low vaccination rates. In fact, there are still about 450 deaths from measles each day – or about 18 per hour – worldwide.

One of the countries where children are at the highest risk is the UK where, according to an April 2013 report from Medical News Today, up to 2 million children are at risk for the condition because of the number of parents refusing measles-containing vaccines. It is thought that the reasoning behind the low vaccination rates has to do with the concern over measles-containing vaccines contributing to the number of autistic children. This theory has been refuted, however, by several medical professionals and organizations.