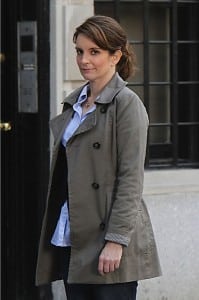 Tina Fey is expecting again! That news was revealed today when the actress sat down with Oprah Winfrey for a chat that will air next Tuesday (April 12th). The actress visited Oprah to talk about her new book, Bossypants, and an upcoming SNL cast reunion.

Us Magazine, is reporting that a rep for the actress, who is five months along, confirmed the news today.


This will be the second child for Tina and her husband Jeff Richmond. The couple has a five-year-old daughter named Alice.

In her new book, she talks about the decision to have a second child:

“I thought that raising an only child would be the norm in Manhattan, but my daughter is the only child in her class without a sibling. Most kids have at least two. Who will be my daughter’s family when my husband and I are dead from stress-induced cankers? She must have a sibling.”

Congratulations to the couple on the pending arrival!