Home » Candy Eaters May be Healthier Than Thought 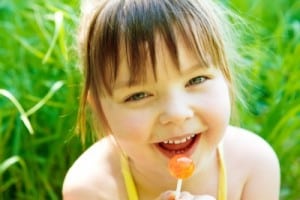 Parents generally restrict the amount of candy their children consume, and rightly so.  But, emerging research is indicating that eating sweets in moderation is not such a bad thing.

A study, funded by the National Confectioners Association and the United States Department of Agriculture was published in the February issue of Nutrition Research.  Researchers found that subjects, who reported eating candy, tended to have smaller waistlines, lower BMI and a reduced risk of high blood pressure and metabolic syndrome.

The results don’t suggest that eating candy will result in weight loss, only that the respondents who reported candy consumption ate moderate amounts, about 1.3 ounces a day, and may have been more active to compensate for the extra calories.

Researchers outside the study have been critical of the findings.  The study used a 24-hour reporting system, which can be inaccurate if respondents forget or omit some of their consumption.

“The 24-hour recall only describes what people think they eat or what they would like to ideally eat.”

“The thing to remember is, candy alone does not cause weight.  Taking in more calories than we expend is really what causes weight gain.”

Tallmadge acknowledges that candy is not the real culprit, causing expanding waistlines.  The true culprit is calorie dense junk food with low nutritional value, like pop, chips and baked goods.

Provided treats, of any sort, account for no more than 10 percent of daily caloric intake, candy can be included in a part of a healthy diet. – Jen R, Staff Writer