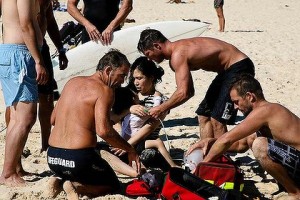 The mother of the rescued toddler comforts her daughter as lifeguards revive her. Photo: Fergus Woolveridge VIA SOURCE

A trip to Bronte beach for a family turned into a life threatening drama when the father and 2 year old daughter began drowning due to a rip off.


According to lifeguards it was just before 10.30 am in the morning of Friday when the girl was spotted being hurled away by a rip in the south end of the beach. Lifeguard Anthony “Harries” Carroll feared she was dead as she was under water for 40-45 seconds.

Another lifeguard, Michael “Mouse” Jenkinson paddled out to save her but a strong shore break was making it difficult for him to reach her. Surfers in the vicinity saw him waving at them and they pulled the toddler out who was already blue.

“They were right out the reef and she was blue, not breathing,” said Jenkinson. “Some surfer, I just seen him pick her up like a rag doll and then he passed her to me and she was that big,” he said.

He immediately went to work.

The lifeguard then began the tough job of holding the baby close to his chest and paddling back to the beach despite the strong shore break that had knocked the girl out.

During that time, another lifeguard had spotted the girl’s father and went to rescue him.

“Her dad was drowning 20 metres from us and we didn’t know because we were focused on this little girl,” Mr Jenkinson said.

The father was shaken and had a small cut on his right leg. The family could speak very little English and though the girl’s mother tried to get into the water to help, a bystander pulled her out.

The family was later taken by the NSW ambulance team to Sydney Children Hospital. Here the girl was said to be serious but in a stable condition.

Onlooker Duncan Horsecroft said that the girl and her father were standing on the beach when the rip suddenly swept the two 25 or 30 metres out into the sea, just inside a line of surfers.

It was thanks to quick acting lifeguards and surfers who saved the life of both the father and the child.