Home » Toddler Diagnosed With A Cold Really Had Cancer 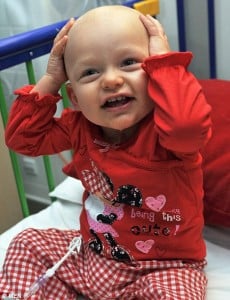 The doctors who first checked Ruby Tanswel thought the toddler had a simple cold. However, her mother refused to believe that was all that was wrong with the little girl. After finally getting a thorough check-up, it was discovered that the girl had a giant tumor across her windpipe.

Little Ruby was refusing to eat, could barely breath, and felt miserable. Doctors gave her mother nose drops to use and prescriptions for antibiotics. However, she seemed to get worse instead of better. After three diagnoses as a simple cold, Adelle Wright took her toddler to a hospital demanded a real check-up. What the doctors finally found was a tumor covering 90 percent of Ruby’s windpipe.

Miss Wright, an administrator, said: ‘It was such a shock when she was diagnosed

In a week we had gone from being told she had a cold to having cancer. I felt like the doctors were just fobbing us off as pushy parents, but I knew something was wrong.’

Thanks to her pushing to get her daughter seem, Adelle may have saved her daughter’s life. The tumor was caught in time to begin chemotherapy and have surgeries to remove the cancer from her throat.

Ruby suffers from rhabdomyosarcoma, a fast growing cancer that affects the soft tissue. This type of cancer is rare, affecting only around 60 children each year. The tumor grows so fast, she went from being perfectly healthy to near death in only a few short weeks. Without quick treatment, she would have been sufficated by the tumor as it grew.

Miss Wright said: ‘If we hadn’t taken Ruby there she could have gone to sleep one night and not woken up – which is an horrific thought.’

Adelle Wright is the cousin of comedian Jason Manford, a British comedian. Manford has participated in a charity walk to help raise funds for the hospital; that is treating Ruby. So far, the charity has raised $17,457, or £11,000, for the hospital. – Summer, staff writer