I think the is the second time I have heard of this happening. You would think that after the first time the company would redesign their machines so that small children couldn’t get stuck in them.

When 3-year-old Robert Moore tried to circumvent they system to get his hands on a Sponge Bob stuffie he ended up trapped inside a vending machine. 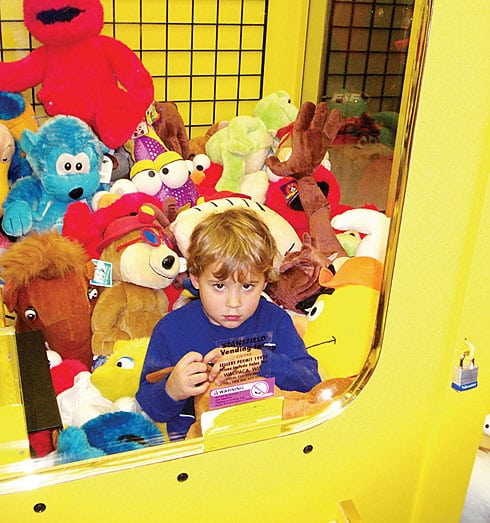 The toddler was out shopping with his grandmother, Fredricka Bierdemann, and three siblings on Saturday night when the unfortunate event. Bierdemann ended the trip by giving each child a dollar and telling them to have fun in a retailer’s game room.

The stuffed Sponge Bob in a vending machine’s bin caught Robert’s eye but he couldn’t seem to win it while playing positing the crane.

When she turned her back to get another dollar for a second try, Robert took off his coat and squeezed through an opening in the machine. He landed in the stuffed animal cube.

“I turned around and looked for him, and he said, ‘Oma, I’m in here,” Bierdemann said. “I thought I would have a heart attack.”

Store employees couldn’t find a key to the machine, so Robert had to wait until the fire department arrived before he could be rescued.

“He was having a ball in there, hugging all the stuffed animals,” Bierdemann said. “He was so good-natured, but I was shaking like a leaf.”

Firefighters broke one lock but then spotted two latches inside the plastic cube. They passed a screwdriver to Robert.

“He stacked up all the stuffed animals and used that screwdriver to open the latch,” his grandmother said. “You should have seen him go.”

Eventually, Robert freed himself. But his mother, Marie Moore, and grandmother said they were lucky that he remained calm when another child might not have. He went home safe — but without a stuffed Sponge Bob.