Emily Keicher is like most three-year-olds, she loves taking pictures, dancing, and making snowmen. She’s full of energy, has a smile that will warm your heart, and she’s adorable. All that cuteness can be seen on the cover of Parent’s Magazine’s February edition. Like most parents would be, Emily’s parents are filled with pride. 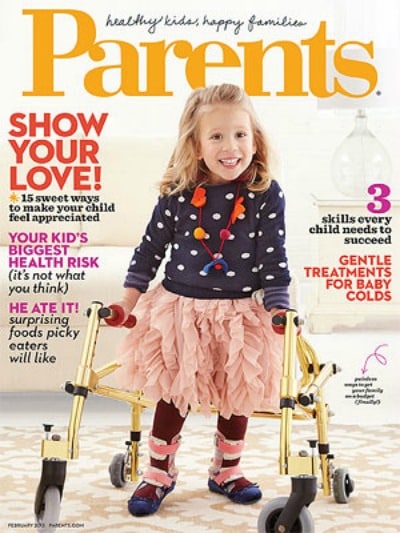 “It was crazy,” Emily’s mother, Liz, told First Coast News. “We’ve never done a professional photo shoot or semi-professional photos before…It was surreal to walk in the store and to see it out of the corner of my eyes.”

During her November 5th photo shoot, Emily charmed the photographers with her playful, fun-loving nature and infectious smile. It was a day that her parents will never forget.

“They were so professional, and yet everything was so friendly,” Liz said. “She had a great time. They asked her if she wanted music on, she asked for Lady Gaga, they put Lady Gaga on, and she was dancing. She had the whole crew dancing.”

Emily’s personality and smile are so bright that it actually takes a moment to notice that there is something a little extra special about this adorable little girl; Emily has spina bifida.

Like most parents, the Keichers were looking forward to the birth of their very first baby. But during Liz’s 18th week of pregnancy, an ultrasound picked up Emily’s birth defect. Liz called the day of the diagnosis her “darkest day ever,” but the diagnosis failed to overshadow the fact that they were having a baby – a baby that they had been trying so hard for.

“We had no idea what spina bifida was,” Liz said. “It was hard because, at that time, it was this baby we had been thinking of and then someone comes along the way and tells you it’s something different…The pregnancy is the hardest part because you don’t know what you’re facing. One of the hardest things when I was pregnant was that people would say, ‘Oh, I’m so sorry.’ And I get that they were sorry that we had a medical diagnosis, but we weren’t sorry. We were still having a baby. For us, it was still the baby we’d that been trying so long to have. That it wasn’t that she’s Emily who has spina bifida. It’s just that she’s Emily.”

Spina bifida happens when the spinal canal and backbone fail to close during gestation. No one really knows what causes this condition that affects approximately one in 800 babies, but it can cause a number of complications. For Emily, it meant spending some time in the neonatal unit after birth, a shunt placement a couple weeks after birth, lots of doctor’s visits, and many types of therapy – physical therapy, occupational therapy, aqua therapy, horse therapy, and even “mom” therapy.

“When we go out to Target or Red Winds, the aisles are wide, she has the full gamant. I mean, that’s the ideal for her,” Liz said. “It ends up being great therapy, and she doesn’t even realize it because she’s getting that work.”

While others may see her special needs as limitations, it’s easy to see that Emily doesn’t let anything stand in her way.  She uses forearm crutches (hot pink and purple) or a walker (gold), to get around. She’s participated in the Kid’s section of the Buffalo Marathon and the Disney Marathon.

Those “limitations” don’t take away from being Emily’s parents either. Emily’s parents say the last thing they need is pity because, not only do they feel their life is fuller and more fantastic because of their daughter, they say that Emily has taught them so much about life, and they are better people for it.

“I think that people often equate ‘Oh she’s in a walker. She must be unhappy or life must be hard.’ I know that people pity us because I’ve felt that, and honestly it breaks my heart because we have a fantastic life,” Liz said. “In retrospect, you look back and kind of think that everything happens for a reason. And while it completely changed the life we had and put us on a new journey, it has been unbelievable. And who we are today are different people from who we are four years ago, but I can say firmly that we are better people and have learned so much from her.”