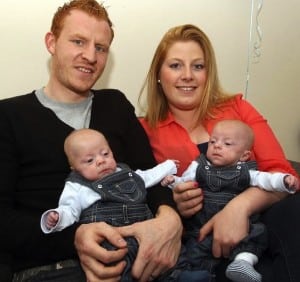 It’s undoubtedly been a long, emotional and probably even frightening experience, at times, for the parents of George and Harrison Kent. But it seems that their two babies, born at less than 4 pounds between them, are finally ready to go home and the fight they’ve endured to get to that point is nothing short of amazing.

It all started when Melanie, a nursery nurse and her husband, Stuart, a British Gas engineer, discovered that they were expecting identical twins, due in August. Like most parents, they were excited. But that excitement soon turned to fear in the 16th week of pregnancy, when things took a scary turn.

The couple learned that the infants were suffering from what is known as twin-to-twin transfusion.  Harrison was taking too much blood away from his brother. This could have stopped George from growing, and it ultimately could have resulted in losing both of the twins in utero.

To try and save the twins, doctors drained four liters of excess amniotic fluid from around George. The procedure, intended to save the infants, ended up sending Melanie into preterm labor just three days later. 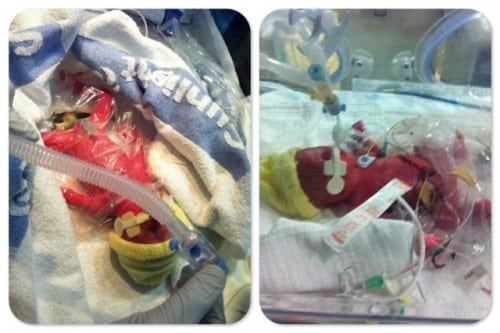 Arriving at 25 weeks, the twins were transported to separate hospitals – George, born at 1lb, 9oz, went to Cherstey and Harrison, born at 1lb, 12 oz, went to Luton. Melanie, was forced to remain at the hospital they were delivered at, Broomfield, because of an infection but she was finally able to see her children two days later.

The remaining months were spent driving miles and miles to separate hospitals. A few days after birth, George was transported to Norfolk and Norwich Hospital. He was found to have a tear in his small intestines, but was able to recover without any surgical intervention.

Harrison had a harder road to trek. Doctors found that he had Necrotizing enterocolitism(NEC) and three-quarters of his bowels had to be removed. He also required a stent to close a duct on his heart at Great Ormond Street Hospital. He then took a turn for the worst. He had been diagnosed with group B streptococcus; his parents and doctors feared he wouldn’t make it.

“His body was in complete shutdown,” said Melanie, but little Harrison pulled through, and all in the course of just one day. “Twenty-four hours later, he was like a completely different baby.”

Both boys were also treated with a laser for an eye condition that threatened their vision. While their some of their peripheral vision was lost, their central sight seems to have remained intact.

Finally, with the biggest challenges faced and behind them, the boys are ready to go home. George is up to 7lb, 11 oz and his mother says, “George has always been quite laid back and he loves the attention.”

Harrison, now weighing 7lb, 14oz, needed some time to adjust to the idea of being held.

“Harrison, when he was younger, absolutely couldn’t’ stand anyone touching him,” Melanie said. “He used to fidget, but now he always wants to be held.”

And the fights are already starting between the two boys.

“I don’t know if it’s because they are redheads, but they got a bit of a temper,” said Melanie. “They beat each other up.”

So happy to hear that both of the little guys pulled through!  That fighting spirit, whilst it may be a bit of a headache for mom and dad in the years to come, certainly  played a big part in keeping these beautiful baby boys alive!