Annie and her husband, Joby Johnston, had been trying for quite some time to have a baby. Finally, after several rounds of in vitro fertilization, artificial insemination and even surgery, the couple decided to take a break.

“We were tired of doing the same thing and expecting a different result,” Annie, 34, told Good Morning America. “Chrissy was our different thing this time around.”

Chrissy Knott, 37, is Annie’s only sibling.

Though married with two children of her own, Chrissy had offered to help Annie and Joby back in 2011. At the time, the couple had only failed at a few rounds of IVF, and they wanted to keep trying. But two years later, after several rounds of heartache, they finally decided to take Chrissy up on her offer.

In February of this year, Annie and Chrissy both went to the IVF clinic. Each had two embryos planted. Even though there was a chance that there would be four babies, Annie and Joby weren’t overly concerned – they just wanted to increase their odds of having at least one healthy baby.

“The doctor made sure that everyone was okay with the possibility of four babies because it was possible,” Annie said. “But, for us, after trying for so long, we were just trying to increase our chances of getting at least one.”

Nine days later, both Annie and Chrissy would learn that they were pregnant – that meant at least two babies. Then, at the seven-week ultrasound, there’d be even more baby joy; Annie and Chrissy were carrying two babies each – twins! Of course, if you got technical about it and combined both pregnancies (all four did come from Annie and Joby, after all), the two sisters were expecting quadruplets!

“I was relieved, more than anything, that the babies were still developing,” Annie said. “My husband, I think, was thinking more down the road of what we were going to do with four babies.”

Thankfully, they wouldn’t have to think much about it since Chrissy lived just seven houses down. And, upon hearing the news, Annie and Chrissy’s parents put their house on the market to come to live with Annie and Joby.

With the entire family ready and waiting, all that was left to do was…well…wait.

On October 24th, the wait would be over.

Both sisters had a scheduled C-section that day; Annie and Joby wanted all four babies to have the same birthday. All four babies – Charles (6 pounds), Thomas (6 pounds, 2 ounces), Grace (5 pounds, 7 ounces) and Hadley, (5 pounds, 4 ounces) – were born healthy. 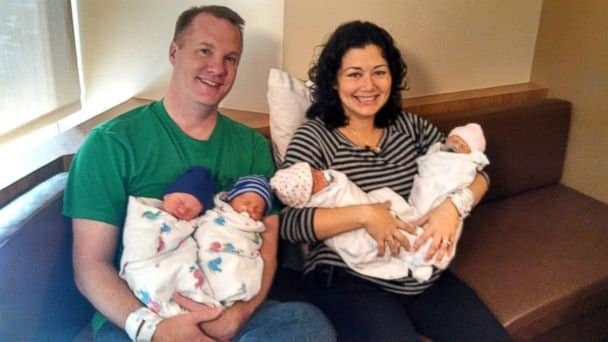 “My sister was carrying the two boys, and she delivered first, so I could be there in the room for her when she had them,” Annie said. “Two hours later, at 9:30 a.m., I delivered the girls.”

It’s hard to imagine going from being childless to having four children all at once, but for Annie and Joby, it’s a dream come true – one that hasn’t quite sunk in yet, despite both sisters pumping to ensure there’s enough milk and the living room of the Johnston house being a makeshift nursery until the quads are old enough to sleep in their nursery.

“We still can’t believe it sometimes,” Annie said. “We’re very thankful for what she did for us. We’re very grateful and thankful that they’re all here.”