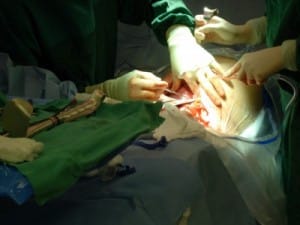 The average caesarean birth costs more than twice the amount of a natural, uncomplicated birth. That’s big money for cash-strapped hospitals which is exactly why they have recently banned all non-emergency caesarean births.

The ban is much different than the discouragement that hospitals have practiced in the past. Previously, moms were simply educated about the risks. The new ban makes it practically impossible for women to go ahead with a planned caesarean unless there is proof that either mother or baby’s life would be endangered through a vaginal birth.

UK hospitals aren’t the first to ban non-emergent caesarean births. Major hospitals in Phoenix, Arizona also banned elective C-sections back in June of this year. The new movement is not getting a lot of support, particularly from women that want or have chosen caesareans in the past.

Mothers’ groups argue that a patient’s choice is more important than objective risk. They claim that planned caesareans, for many mothers, are a way to avoid the trauma of an unplanned caesarean and post-natal conditions like incontinence.

Mothers’ rights campaigner Leigh East from Illkley in West Yorkshire told reporters, “This is outrageous because one in four women will have a caesarean whether they want one or not. Women who make a positive choice to have a caesarean and remove the risk of an emergency caesarean stand a far better chance of a positive recovery than women who go into childbirth blindly.”

Maureen Treadwell of the British Trauma Association also stands behind the patient’s right to choose the method of birth, stating that, “There are a small group of women who appraise the risks of natural birth versus caesarean and consider caesarean is better.”

Even Dr. Paul Armstrong, consultant obstetrician at London’s Portland hospital feels that women should be able to make the choice on their own. “Just as a woman has a right to choose home birth or other non-interventionist techniques, so should she have the right to choose a caesarean.”

Despite the arguments, however, one thing remains – vaginal birth is considered safer for both mother and baby. While the ban may be fueled by cost, health experts have stressed to women for quite some time now that birth by caesarean increases chances of breathing problems. Fatality can occur from caesarean birth due to placenta problems. More recent studies have even indicated that good bacteria that are important for baby’s health are passed along from mother to baby during a vaginal birth. Some experts even contest that bonding between mother and baby can be hindered by the recovery from a caesarean birth.

No matter which side you stand on, one thing is for certain – more hospitals are adopting similar bans on elective caesareans. They may soon be practically impossible unless they are warranted by a medical practitioner and researchers are even working hard at reducing the number of women that need an emergency caesarean. Researchers are also working hard on raising the VBAC success rate through clinical studies. While all of this may make some mothers angry, and I can definitely understand why, it just might end up being better for everyone in the end.