Home » UK Ministers to Decide on Mitochondrial Donor for IVF 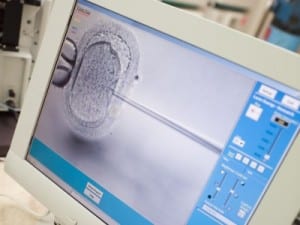 With most in vitro fertilizations, there are two parents: the father or sperm donor and the mother or egg donor. In the future, however, there is a possibility that a third donor may come into play for some families. This third donor would supply the mitochondria, specialized compartments found in almost every cell in the body. These compartments supply more than 90% of the energy needed to support life and growth. Failure of the mitochondria results in a condition known as mitochondrial disease.

Scientists have discovered several different types of mitochondrial disease. Currently, it is estimated that at least 1 in 200 children are affected with one form or another. Symptoms vary depending on the type of mitochondrial disease the child has, but some of the most common symptoms include weakness, blindness, heart failure, seizures, swallowing difficulties, diabetes, loss of motor control, and even death. At this time, there is no cure for the disease, so for families affected by the condition, the results are often devastating.

In natural conception, there is no way to avoid mitochondria disease at this time. This is not the case with in vitro fertilization. Because scientists now know how to remove the original mitochondria from the mother’s egg or donor’s egg, new mitochondria can be implanted. Up to this point, however, the UK has only allowed research into mitochondria donation.

The consultation set up to discuss the issue is set to continue until December 7th. Conclusions will not be presented until next spring. But why would preventing such a devastating disease be a controversial issue?

Part of the controversy in mitochondria donation has to do with the fact that mitochondria contain their own DNA, so any child conceived using this method would have the DNA from three different people: the mother or egg donor, the father or the sperm donor, and the mitochondria donor. In addition, because part of the DNA of the egg is being removed, this would be considered a form of genetic modification. Those genetics would be passed down through generations.

“It is genetic modification of the egg – that is uncharted territory. Once we have genetic modification, we have to be sure we are damn happy,” said chair of the Human Fertilization and Embryology Authority. She says the big issue is determining how to “[balance] the desire to help families have healthy children with the possible impact on the children themselves and wider society.”

But this isn’t the first time that mitochondrial donation has been discussed. In former discussion, Nuffield Council on Bioethics said the treatment was ethically okay. The Human Genetics Alert didn’t agree, however. They called the procedure unnecessary and dangerous. They also believed that it set a precedent for genetically modified designer babies.

The Human Genetics Alert does have some valid concerns. Currently, there are still questions regarding safety of mitochondria donation that need to be discussed and dealt with. Professor Mary Herbert from Newcastle University says they are starting to discuss those issues. She also added, however, that it will take time before the procedure is available to patients, even if the ministers actually give the okay.

“We are not undertaking experiments to test the safety and efficacy of the new techniques,” Herbert said. “This work may take three to five years to complete.”