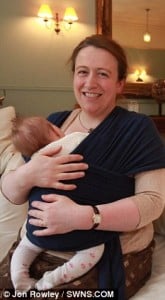 Only 7 hours after giving birth to her third child, Dr Helen Wright was back at work at her job as headteacher of one of Britain’s highest-achieving private schools. Parents are both in awe and frustrated by this new mother’s dedication.

Dr. Wright’s job is not like any other job, a fact that she readily admits. When she returned back to work she was able to do so with her newborn carried against her chest. A privilege that not many mothers are given in modern society.

Dr. Wright says, “with all three children I have been back at work pretty much immediately because – and this is what seems to have passed a lot of people by – I’m lucky enough to be able to take my children with me. If the governors at my school had said ‘you can either work, or be with your baby’, there would have been no debate there. I would have chosen my baby because having a baby is the most remarkable and fulfilling thing a woman can do, and there is no way I would miss those first few weeks. But the crucial thing is that no one made me choose, and I don’t think other women should be made to choose either.“

Many mothers have been amazed at her ability to get back into work so quickly. Dr. Wright felt it was important that the children in her school see motherhood and a career combined. Unfortunately, some parents are not happy to see her working so soon after birth. Anonymous posters at an online network have attacked Dr. Wright, calling her names such as “silly cow” and claiming that she is sending the wrong message to students. Dr. Wright takes the attacks in stride, however.

“I’ve come to realise that I have had a choice that many women haven’t had, or feel they haven’t had. I think a lot of the anger directed towards me is anger at their own situations,” says Dr. Wright.

Dr. Wright was required to wait three hours after giving birth before being discharged from the hospital. Though laws are in place that prevent women from retuning to work too soon after birth, because Dr. Wright and her family live in an apartment on the school grounds she was able to bypass the limitation. Her quick ability to return to the workforce so soon after birth has garnered some complaints that she is raising the bar too high for other women, a complaint she completely denies.

“I want to see a world where they have the choice. This is absolutely not about making anyone feel pressured, quite the opposite. Women should go back to work when they feel ready and when their situation allows it, whether that be after one day or one year,” Dr. Wright points out.

As a mother who had easy labors and was able to bounce back within hours, I love hearing about other mothers doing the same. I hope that more companies understand that they do not need to force parents to divide their work and family lives. On site daycare services, better maternity leave, and the option to bring a new baby along with you to work are benefits that all parents deserve to have. – Summer, staff writer