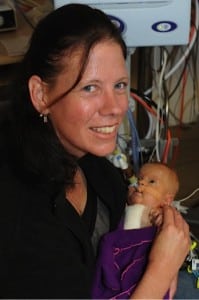 In July, we introduced you to Taylor Gardner. This amazing little girl was born at 25 weeks weighing just 540 grams.

A 19 week ultrasound revealed Taylor had a complete heart block found in 1 in 200,000 babies.

At that time her mother Rebecca Gardner was put on bedrest so that her pregnancy could be monitored.

“It was heart-wrenching, but I wanted her to survive because she is my 11th pregnancy and I only had one child,” Ms Gardner said.

Nine hours after she was born, doctors connected her tiny heart, which was half the size of a cherry, to an external pacemaker that was bigger than her entire body.

Although only a handful of premature babies in the world had ever been fitted with an external pacemaker, and none less than 750g, Dr Alex Veldman said surgeons had no other choice but to rewrite history. 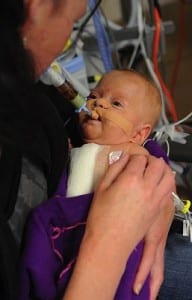 The next steps for this miracle baby will be to withdraw her respiratory support and increase normal feeding so she can go home in coming months, he said.

Taylor’s mother, Rebecca Gardner, said she cried tears of happiness when she saw Taylor emerge from surgery last week without wires connected to her heart. Among other things, it meant she could hold her baby more freely.

”If she’s home for Christmas I’ve already told people that I will put a bow on her and put her under the Christmas tree. She will be my Christmas present.”

I am so happy for this family. I hope that the doctors are able to wean Taylor from the vent in time for her to be home for the Holidays.

It is amazing that she has been able to survive being born so early and having a heart condition. This is one determined little girl.