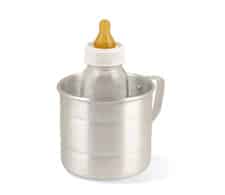 This is a question for all expectant mothers considering (or already) bottle feeding: What would you do if you woke up one morning and learned that baby bottles were no longer being made or sold in your country? This question may become a reality for Venezuelan moms who may not have planned on breastfeeding.

According to the Telegraph, UK, the new proposal is being considered by Socialist party. Odalis Monzon, one of the members of that party, says that the new proposal would “prohibit all types of baby bottles” to improve the health of the country’s children.

“We want to increase the love (between mother and child) because this has been lost as a result of these transitional companies selling the formula,” Monzon told the Telegraph.

The Law for the Promotion and Support for Breastfeeding passed in 2007. At that time, no sanctions were made for using formula, and the party isn’t sure what exceptions will be made, should the country’s Congress approve the ban, which is very likely since the Socialist party has a majority in Congress. However, Monzon believes that some exceptions may include the death of a mother and cases in which the health ministry determines that a mother has low milk supply.

Of course, this ban isn’t likely to just blow over with the general public. While many do recognize that breast is often best for both mother and baby, many also feel that, by passing the ban, the state will be reaching too far into the private lives of its citizens.

“People are free to feed their children as they see fit,” Ingrid Rivero, a 27-year-old mother in Caracas told the Telegraph. “My daughter stopped breastfeeding after seven months. What can I do? Force her?”

And, as much of an advocate of breastfeeding as I am, I have to agree with Ingrid to some extent. There are many reasons that a mother may choose to formula feed. Maybe she works long hours that keep her away for her baby for very long periods of time. For example, nurses, doctors and other medical professionals may work 18 hour (or even longer) shifts.

And some mothers and babies don’t take as easily to breastfeeding. The level of ease in breastfeeding each of my children was different – some were naturals, others really struggled. Then there are medical conditions that may prevent or make breastfeeding practically impossible. For example, one of my children was born with a cleft palate. No matter what the doctors and I tried, he just couldn’t get any form of suction. In the end, we went to bottlefeeding because we didn’t really have any other choice.

What do you think? Is the potential ban too much of an intrusion on the public’s right to freedom? If passed, do you think it would end up improving the breastfeeding rates? Are there other ways that the state can go about improving those rates without taking away freedom of choice? We’d love to hear what you have to say.