Home » Vince Vaughn and Wife Kyla Expect Baby #2! » **EXCLUSIVE** FIRST ON SET PHOTOS: Vince Vaughn gets a special visit on set from his wife Kyla Weber and their daughter Locklyn on the set of ‘The Internship’ filming on location at a mattress store 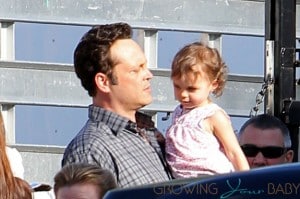 83683, ATLANTA, GEORGIA – Monday September 10, 2012. **EXCLUSIVE** FIRST ON SET PHOTOS: Will Ferrell, Owen Wilson and Vince Vaughn are seen on the set of ‘The Internship,’ filming on location at a mattress store in Atlanta, Georgia. Wilson could be seen playfully chasing his 1 year old son Robert Ford Wilson around the trailers while on break from shooting. Ferrell could be seen sporting a goatee and salesman attire as he arrived on the set. Vaughn got a very special visit on set from his wife Kyla Weber and their daughter Locklyn Kyla. The movie features the ‘Wedding Crashers’ duo Wilson and Vaughn re-teaming on this Shawn Levy directed comedy as two out of work salesmen who have to compete as interns in a successful internet company in order to score a job. Photograph: ©PacificCoastNews.com **FEE MUST BE AGREED PRIOR TO USAGE** **E-TABLET/IPAD & MOBILE PHONE APP PUBLISHING REQUIRES ADDITIONAL FEES** LOS ANGELES OFFICE:+1 310 822 0419 LONDON OFFICE:+44 20 8090 4079