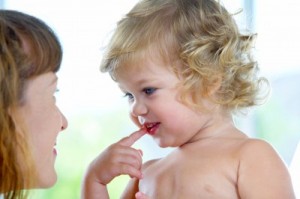 Toddlers on the autism spectrum tend to pronounce words differently than their peers. These differences could be used to detect the disorder in toddlers, before other classic signs are noticed.

A new device called LENA (Language Environment Analysis), could become the newest early screening tool for autism. The machine records the speech of a toddler throughout the day, then analyzes the sounds and noises of each word. Toddlers that pronounce certain words differently would then be able to get early intervention.

LENA costs around $195, and researchers say it has an 86 percent accuracy rating. According to the findings on the machine, published in the Proceedings of the National Academy of Sciences, LENA can also detect the differences between toddlers with autism and those with only language delays. Being able to detect these differences early can allow parents and care providers to help children sooner.

Professor Steven Warren, of Kansas University, said: “This technology could help paediatricians screen children for ASD to determine if a referral to a specialist for a full diagnosis is required and get those children into earlier and more effective treatments.”

The researchers studied 232 toddlers, between 10 months and four years of age. More than 1,400 verbal recording were analyzed, consisting of 3.1 million identified utterances. The most important differences the researchers found seemed to be the way toddlers produced well-formed syllables. Their rapid jaw and tongue movements when talking appeared to be different in those with autism than those without. This changes the way a toddler learns to pronounce certain words.

Voice control is something that infants begin developing early on. This skill becomes more refined as they grow and develop. According to the researchers, even the early speech of infants can be different from that of typically developing children. For many children, however, autism is difficult to detect early in the early years. – Summer, staff writer