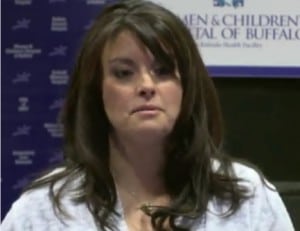 Alison Camp was 19 years old when she first learned that she had been born with two uteruses, a condition affecting only one to two percent women in the world. But even for her, it was a surprise when she found that she was expecting babies with one each in each of her uteruses.

Alison has a condition called Uterus Didelphys where each of her fallopian tube and ovary is attached to a different uterus instead of one. The condition does not affect fertility and women can get pregnant.

Alison is already a mother to two and it was a pleasant surprise for her and her husband Tim when they learned that she was expecting again.

“We were joking around with my regular OB that on Grey’s Anatomy there was a woman who had a baby in each uterus, and that could happen to me and we thought that was just hilarious,” Alison said. 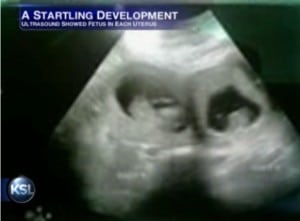 But the jokes turned reality when her 11th week ultrasound showed one baby each in the left and right uterus.

Alison has spent some time researching on her condition and says that there are only 73 other documented cases of such pregnancies.

“Very rare. I’ve never seen it, and I’ve been doing medicine for 40 years.” 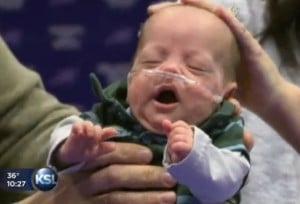 Because of her high risk pregnancy it was decided to perform an emergency C-section in October. Twins Carter and Griffin were born 14 weeks premature and weighing a mere one and a half pound each.

“I couldn’t touch them for the first couple weeks because they couldn’t handle touch,” Alison said.

Carter was released from the hospital a week ago weighing seven pounds. He is still on oxygen and still requires a heart and respiratory monitor. Griffin still remains in the hospital because his heart rate sometimes drops dangerously low. But the baby is expected to follow his brother home soon.

“It just seems unbelievable to me that we’ve been this fortunate that we’re going to walk away with, for all (intents and) purposes, two healthy young boys when the odds were stacked against us,” Tim said. 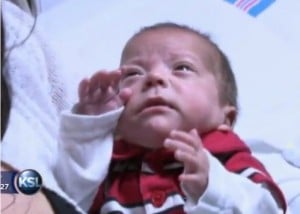 Allison feels that their journey of birth is already a very important life’s lesson the boys have learned. As they grow older she hopes to tell them their own survival story when they are faced with disappointments.

“(I’ll tell them), ‘you’ve been through a lot worse you need to not cry about this. This is nothing,’ ” Alison said. “So I want them to know that ‘you are a fighter and you’ve already overcome so… the sky is the limit.’ “

The proud mother says they are already little fighters.