Jennifer Garner was one busy mom in Santa Monica today. The actress was spotted picking up some haircare products and meeting with friends before she headed over to the Land Rover dealership to pick up her new wheels! 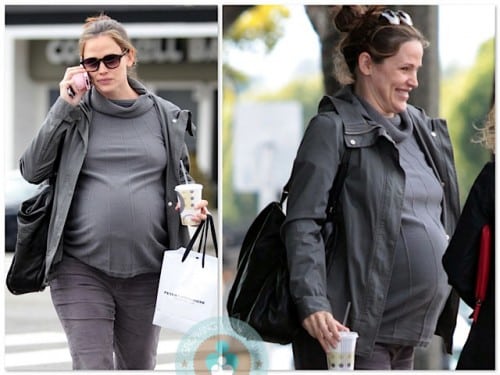 Has Jen traded in her fancy silver Mercedes-Benz GL350 BlueTEC? It appears so. The actress arrived at the dealership and left with a sparkly new red Range Rover Sport, which will have more than enough for her growing family.

Due in just a couple weeks, Jen revealed that she’s not sure if Ben wants a little boy saying,

“I would have thought [he wanted a boy]. At first I think I really thought so,” Garner told host Jay Leno. “And then he kind of said, ‘Well, we have girls. We know how to do girls. My girls love me. I’m the big guy in the house.’ So, now I’m not sure.”

Jen knows the sex of the baby but isn’t telling. The baby is due late February early March so we won’t have long to go before we find out!