A 10 year old Ricky Martinez from Orange County, was diagnosed with a rare condition that could only be cured with a bone marrow transplant. But doctors saved Ricky through an equally rare procedure using his own umbilical cord blood that his mom had donated when he was born. 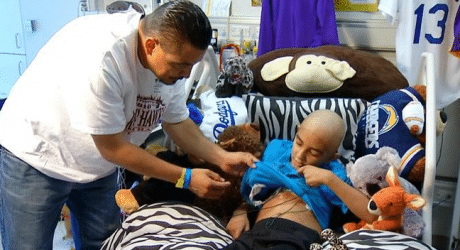 Last year it was revealed that Ricky had an extremely rare disease known as Aplastic Anemia.

“I didn’t understand what platelets were, what white count was,” he said.

“Knowing that this is our only child that was the most devastating because I was like God please don’t take him from me,” said Cynthia, Ricky’s mom.

The family held numerous blood donation drives including a blood drive organized by students at Cal State University San Marcos back in December.

“He’s my world and just like any child would be to any parent, you’re going to sacrifice and do whatever it takes to fight until the end,” said Oscar.

The doctors at the Children’s Hospital of Orange County tried hard too to find a match for Ricky. But instead of a bone marrow donor, what they unexpectedly found was Ricky’s own umbilical cord through a national database in Washington D.C. Ricky’s mother had donated the umbilical cord to science after he was born.

“We couldn’t afford to bank it ourselves [so] I figured let me help somebody else,” said Martinez.

But in an ironic twist of fate, “It came back,” she added.

The blood from the umbilical cord was used for the blood transfusion and Ricky is recovering fast.

Ricky was finally able to go home on Wednesday, after a month long stay at the hospital.

He will now need to see the doctor twice a week as the procedure performed is still in it’s experimental stage. There will also be more lab tests and more blood transfusions if needed. Ricky will also need to be on a special diet for the next 100 days to build his immune system.

But he already feels he is special.

“It makes me feel special because I’m helping other kids have a second chance at life,”Ricky said.