When Riley’s parents refused to abort him at 21 weeks of pregnancy, they knew that their boy was not going to have the same path as other children. Their baby was probably the only child in the world with 6 major heart defects and doctors said that he might not survive. But the little fighter proved the doctors wrong by making a staggering recovery in spite of all his heart defects. 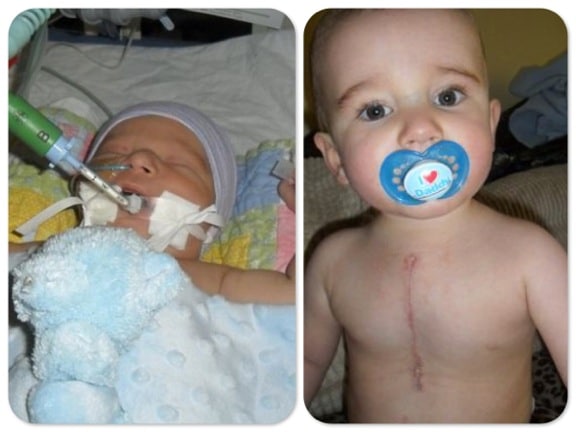 Michelle and Darryl Lewis were first made aware about their baby’s health issues during their 21 week ultrasound. The nurse failed to hear the baby’s heart beat and further tests at the Evelina Children’s Hospital in London, revealed the real picture.

Riley had back-to-front valves, a large hole in the heart, as well as various conditions that made his arteries thick, making it difficult for blood to pump around his body

Doctors advised that it would be best to terminate the pregnancy as the baby had a very small chance of surviving at birth. But the couple was not ready to give up.

Michelle, 32, from Tunbridge Wells, Kent, said, “The nurse’s face just dropped, and she went out of the room to get a doctor. I knew something was wrong and I just burst into tears before they had even told us what was wrong. It was the worst feeling I’ve ever experienced in my life. The doctors said our baby’s heart was struggling to pump blood around his body, and he had so many complications he wouldn’t live. They said they’d never seen anything like it – having so many conditions was totally unheard of. They took us into a little room and advised us to terminate the pregnancy – but there was no way we would even consider it.”

Their parental instincts were right and Riley did live past his birth.

‘The surgeons told us that it is nothing short of a miracle that Riley is here at all. Doctors told us having one heart defect was unlucky, but six was unheard of. They said he probably wouldn’t make it through the pregnancy, and even if he did, wouldn’t survive long after birth. We were devastated – but Darryl and I just turned to each other and we knew straight away there was no way either of us was going to give up on our baby,” says Michelle.

She recalls how each day after that revelation was filled with terrifying , the delivery. The doctors agreed to monitor Michelle closely but she was always concerned that something bad was about to happen.

On Christmas eve 2010 Michelle went into labour that lasted 15 hours before doctors decided to perform an emergency C-section.

“When I went into labour, Riley’s heart stopped every time I had a contraction – we nearly lost him so many times. But he’s a tough little boy and he’s amazed all of us – he’s so strong, and we are so proud of him,” said Michelle.

“I heard this little scream and the nurses held him up for me to see before he was whisked away. I remember seeing his big beautiful eyes and just pleading that he would keep fighting.”

Riley was merely 8 hours old when he had his first surgery. A balloon was inserted in his body to allow the heart to pump blood into his arteries. At five days old, another surgery was performed to insert a shunt into his arteries.

At four months old, they had another scare.  During an MRI scan the baby boy reacted violently to an anesthetic used to put him to sleep. Immediately his heart rate shot to 260.

Michelle recalls their time at the hospital saying,

“After his first operation, the surgeon came out and said to us he had no idea how Riley was still here – he said it was a real miracle. We just spent every minute by his side. He was recovering from his second operation on New Year’s Eve, and all the fireworks were going off outside the London Eye, just across the river from the hospital.

‘The nurses kept asking if we wanted to go outside and watch, but we just wanted to stay with our little boy. It was the best New Year I’ve ever had, the three of us together.’

After five months in hospital, Riley was finally able to go home – and was even well enough to be pageboy at his parents’ wedding in July 2011.

The toddler has undergone three more operations in the last year, but despite them, doctors say he is doing very well. They are also sure that he would be able to lead a normal life as he grows up though he might need surgeries from time to time.

Darryl said, “I just can’t thank all the doctors and nurses at St Evelina’s hospital enough. If it wasn’t for their hard work and dedication, we probably wouldn’t have our little boy – we’ll always be in their debt. We are just two normal people – we don’t drink a lot, we don’t do drugs, we’re quiet living – we couldn’t understand why this had happened to us or how to deal with it. But the doctors and nurses were amazing looking after Riley, and looking after us too.

‘Riley is our little superstar. I look at him and Michelle every day and just think how lucky I am to have them both.’

Some kids were born fighters and this little guy is definitely one of them!