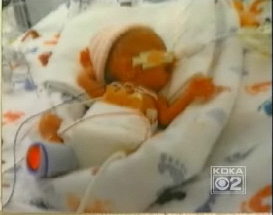 Against all odds Taylor Maree arrived by C-section on March 12 weighing just 350 grams, which is almost 12 ounces.

The doctors could hardly believe their eyes.

“When she popped out they were really astounded at how tiny she was,” according to the NICU’s director, Dr. Jennifer Kloezs.

At birth she was whisked away the second she was born. Her parents only got to see her for maybe two or three seconds before they said they had to get her into intensive care.

Taylor Maree’s 23-year-old mom, Brittany Rideout, of Penn Hills, had a host of serious health issues during her pregnancy, including two strokes, a heart attack, lupus and preeclampsia. 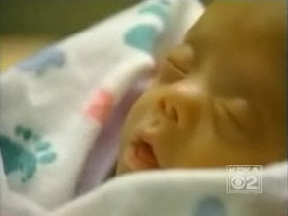 It was the lupus attacking the placenta that forced the birth at 26 weeks.

Now, weighing in at a hair over two pounds 14 ounces the amazing baby is just weeks away from going home. She is not on any oxygen and is currently bottle feeding – 2 important hurdles that need to be conquered before a discharge plan is put in place.

She is the tiniest preemie ever to survive at Magee-Women’s Hospital. They call her a real life fairy tale “Thumbelina.”

Doctors expect her growth to lag behind, maybe for the first couple of years of life – but from everything they can tell developmentally she looks like she’s right on track.

We wish this family well. Getting to this point was undoubtedly stressful. Soon they will be able to enjoy her without all of the wires and machines.