Her name is Quinn Ava Catherine MacNeil, but her aunt has given her an appropriate nickname – “The Mighty Quinn.” 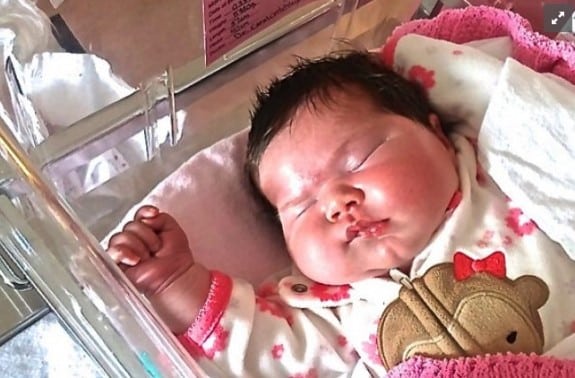 After seven and a half hours of labor, Quinn was born at Cape Breton Regional Hospital at 3:34 a.m. on March 12. During the delivery, mom Brandy MacNeil heard the attending medical staff speculating that her baby might weigh as much as 12 pounds. The 33-year-old mother laughed the comments off, but for the record her infant daughter weighed in at 13.3 pounds and measured 22.5 inches long.

Brandy and husband Brian are parents of two other little girls, 4-year-old Olivia and 1-year-old Breagh. Olivia was a large baby, weighing 9.8 pounds at birth. Still, it came as a surprise that baby Quinn was so big. Brandy had a healthy pregnancy and her doctors anticipated that the baby would be about 10 pounds at birth.

Statistics are kept on baby weights, but the highest categorization tops out at 5550 grams, equivalent to 12.3 pounds. The most recent Statistics Canada show that about 17% of the 185,418 baby girls born in the study period weighed more than 5500 grams. The average weight of a newborn is 3400 grams – 7.5 pounds. And the average range for all babies is between 5.5 and 7.5 pounds birth weight.

There are always unusual exceptions. In 1846, Anna Swan was born in the Tatamagouche area. Her twelve siblings were all of average size and height, but Anna weighed 18 pounds at birth and grew to be a 7 foot 11 inch giantess.

More recently, a German woman gave birth by natural delivery to a 13.7 pound baby girl in 2013. That same year, a baby boy was born one month prematurely in Toronto, but weighed 14.5 pounds.

The Mighty Quinn may not be the biggest baby ever delivered in Cape Breton, but hospital staff says she was the heaviest in memory. The delivery was long and difficult for mom Brandy, who experienced post-partum hemorrhaging two hours after the birth and was rushed back into the emergency room.

The very good news is that both mom and baby are doing fine now and are expected to be released this week. They’re looking forward to going home, and Brandy and Brian are grateful for the excellent care the hospital provided.