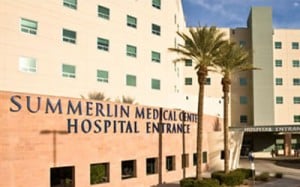 Infants, family members and hospital staff that were in a Las Vegas neonatal intensive care unit this summer are being urged to be tested for tuberculosis after a mother and her twins at that hospital died from the infection. In all, up to 140 infants and their families are thought to be affected, authorities with the Southern Nevada Health District says.

Health officials believe that the 25-year-old mother may have contracted TB through an unpasteurized dairy product from Latin America. She’d given birth in the Las Vegas area in early May to extremely premature babies – Emma, who died at three weeks of respiratory failure and extreme prematurity, and Abigail, who was tested and treated but eventually died from the disease at Summerlin Hospital on August 1st. The mother, who had been sick before and after the delivery, had been transferred to a hospital in Southern California “for a higher level of care,” but ended up passing away on August 22nd. An autopsy revealed that she’d died from tuberculosis meningitis.

According to Dr. Joe Isler, the health district’s chief medical officer, the delayed diagnosis in the mother and her children may have occurred because the disease is relatively rare now in the United States. In fact, officials from the Centers for Disease Control and Prevention Center counted about 569 TB deaths in 2010 (the most recent year for which data is available), and in 2012, the CDC received the lowest number of reported cases of TB since national reporting began in 1953.

Diagnosis is made even more complicated because symptoms are often subtle, Dr. William Schaffner, professor of preventative medicine and infectious diseases at Vanderbilt University School of Medicine told Fox News.

“TB can be very subtle, particularly as many doctors have not had much experience with TB these days,” Schaffer said.

“We did a full contact investigation and that helped us to determine her movements during the time she was not hospitalized but likely infectious, and we’ve followed up with all the contacts we know,” Iser told Fox News.

Dr. Isler, believes that it’s highly unlikely that any of the babies that may have come into contact with the woman or her children. And, according to Stephanie Bethel, the tested hospital staff, family and friends revealed 26 cases of latent TB – which means they aren’t displaying any symptoms and they aren’t contagious. However, health officials still want to do widespread testing of all infants and family exposed to exercise “an abundance of caution.”