The gender reveal party is the new way to celebrate each milestone in your pregnancy. Normally a hostess gift only occasion, the party is thrown to celebrate the sex of the new baby. 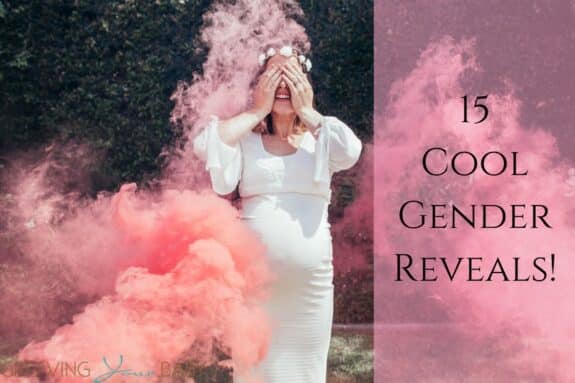 Some parents have figured out some of the coolest ways to reveal if they are have a boy or girl.

Here are some of our favorites!

The most common one is popping a balloon. We’re even seeing celebrities do it now. In fact Kate Hudson just revealed her pregnancy AND gender this way last week. This video is extra cute because her boys Ryder and Bing also had balloons to pop as well.

SURPRISE!!! ? If you’ve wondered why I’ve been so absent on my social channels it’s because I have never been more sick! It was the most sick first trimester of all my children. Boomerangs have made me nauseous, Superzoom is an easy way to have my head in the toilet, food instagrams make me queezy and thinking too much about insta stories made me even more exhausted than I already had been. If you’ve seen me out and about smiling and pretending like everything is amazing…I was lying! BUT! I have broken through on the other end of that and rediscovering the joys of insta/snap. We have been trying to keep this pregnancy under the radar for as long as possible but I’m a poppin now! And it’s too darn challenging to hide, and frankly hiding is more exhausting then just coming out with it! My kids, Danny, myself and the entire family are crazy excited! A little girl on the way ?

Last week Kym and Robert Herjavec revealed the sexes of their twins by balloons as well!

It’s a boy and a girl ! Thanks to everyone for their love & support – @kymherjavec5678 and I are very excited !

Baby G #1 is a… SO much fun learning a little more about our peanut today with our friends and fam!!!???????????#vandibaby #genderreveal

This couple popped balloons with paint in them which appears to have created a piece of art they will likely hang in their baby’s nursery.

I’m not sure if you can tell or not … but I was very excited to find out we are having a GIRL!!! ? #itsagirl #babyreveal #babyrevealparty #happy #excited #babygirl #family #love

Box balloon reveal. For those who don’t love the sound of balloons popping.

This one is a done well.

This one is extra cute. Wait until the end!

Fill it with blue or pink candy and swing away!

Parents to be use the colored smoke is so many different ways.

By doing a burnout?

This mom-to-be attached it to the top of an umbrella.

This dad kicked a ball to reveal his baby’s gender.

#Repost @brionyajames ???*Love and Happiness ? Congrats!! ???? It's. A. ??? . . ??? CONGRATULATIONS TO MY BABIES @dre_keepitplaya & @yannajaee ???? mamas boy is on the way ! As I predicted ! this moment alone makes my heart smile , I love y'all so much and I know y'all will make great parents . #BLACKLOVE #BlackExcellence #GenderReveal #genderrevealvideos

This big brother got to the hero and do the reveal!

Baby King is a…. @boombangreveal #genderreveal ??

Mom and dad each get a cannon to shot when it’s time for the big moment.

Sometimes they combine both smoke and confetti!

It’s a girl ???Congratulations to Angeline and Raymond who used BOTH our Gender Reveal Confetti Cannons and our Red Powder Cannons. Gender Reveal Confetti kits come with two pink and two blue cannons. The cannons are loaded with a mix of mylar and paper confetti that launches about 10 feet. Packaging is discrete and doesn’t give the color away ?Our Powder Cannons are 18” long and are loaded with water-soluble rice powder. This family wrapped the cannons to conceal the color for their reveal, and if you plan to use them as Gender Reveal props we recommend you do the same. This Gender Reveal was so exciting and innovative ????? Thanks, Angeline and Raymond, for including us in your special day! ???? . . . @genderrevealvideos @genderrevealideas . . . #genderreveal #genderrevealparty #genderrevealvideos #pregnant #pregnancy #pregnantchicken #thebump #confetti #confetticannons #color #colorpowder #family #instagood #instababy #photooftheday #celebration #party #unforgettable #socialsteeze #kickinit #bestoftheday #memories #funtimes #smile #happy #love #spring #instaspring #springtime #superiorcelebrations

Sometimes it gets weird….

Mike Kliebert — an alligator wrangler and trainer – who runs Kliebert’s Turtle and Alligator Farm used one of his gators to reveal his baby’s gender.