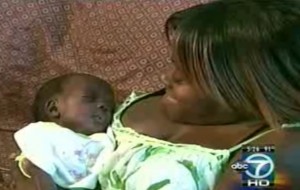 The odds that LaKendra Nelson would be able to give birth were slim. Due to her height and weight Doctors were amazed that the two foot eleven inch women was able to delivery a health baby without suffering any life threatening complications. For the Doctors and LaKendra this was a life altering experience that no one involved would ever forget.

LaKendra Nelson weighs only forty nine pounds and stands a mere two feet and eleven inches. She suffers from a rare disease known as OI (osteogenesis imperfect). OI is a genetic disorder also known as “brittle bone disease”. Individuals suffering from OI have bones that easily break and are shorter than the average adult. Within the U.S experts had estimated that 20,000 to 50,000 people are currently diagnosed with OI.

Doctors are amazed, due to her small stature, that LaKendra was able to carry her baby throughout her pregnancy without any difficulties. 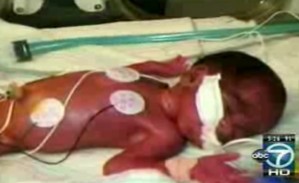 In May LaKendra gave birth to a two pound baby girl, Lakenzie at 28 weeks gestation. At birth she need help breathing but since she has been home her health is improving and is gaining weight (five pounds two ounces).

“Its just one of those unbelievable, can’t explain it..wow..wow..you really came out of me”

Baby Lakenzie was at high risk of being born with her mothers disease (OI). The National Institute of Health states that only one copy of the mutation carrying the (OI) gene is necessary to pass the disease on to the child at birth. Lakenzie was lucky and managed not to inherit the (OI) gene from her mother.

LaKendra won’t have to raise her little miracle on her own, much of her family has already offered and are eager pitch in when help is needed. – Jeff, Staff Writer