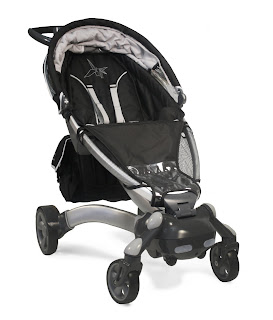 One of the products getting the most buzz in Vegas was 4moms power folding stroller.
The Origami is made of 90% recyclable materials, has daytime running lights and a built in pedometer.

A small generator powers the stroller and recharges itself with every 300 feet of use. The Origami has safety features that include built in intelligence that can detect when a child is in its seat, disabling the automated folding mechanism. With tremendous storage features, the Origami touts an easily removable backpack, cup holders for kids and adults and washable fabrics in a variety of colors.

The Origami is expected to be available during the first few months of 2009.