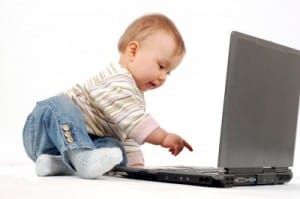 Facebook and other social networking sites are fast becoming the means to announce to the world about your newborn joy or share the adorable pictures of the baby’s latest antics. Now research finds that almost 92 percent of Americans have an online presence by the time they are two year old.

A study that was conducted by Research Now for anitivirus maker AVG found that many parents uploaded pictures of their babies and even ultrasounds to share their joy with everyone. There were also many six-month-olds who had an e-mail address even though they had not even learned to spell their names.

According to the results, 92 percent of American kids have some form of online presence by the age of two and on average children acquire an online presence by the age of six months. One third of Americans and 70 percent of all the surveyed mothers posted pictures and other tid bits about their kids on social networking sites.  Of these 34 percent also posted sonograms of their kids even before they were born.

Says AVG CEO J.R. Smith, 81 percent of the kids get a ‘digital footprint’ by the time they are two years old.  He said he understands, “why proud parents would want to upload and share images of very young children with friends and families,” but thinks they should keep in mind that they’re “creating a digital history for a human being that will follow him or her for the rest of their life.” – Atula, Staff Writer