Though life sometimes hands you a series of events in which everything that can go wrong does go wrong, there are also those times when you know you’ve truly witnessed a miracle. Thankfully, Tonya Owens and her beautiful son, Maddox, were handed a series of miracles that ended up saving both of their lives.

Back in May, Tonya told her mother and her nine-year-old son, Jacob, that she was having severe abdominal pains. The pain was so intense that she ended up going to the emergency room.

“I was hurting really bad,” Tonya told The Times Dispatch Online. “I didn’t know what was going on.”

After arriving at Lawrence Memorial Hospital’s emergency room, doctors rushed her back to an examining room. One of the nurses asked Tonya a question that she wasn’t expecting.

“She asked if I thought I could be pregnant,” Tonya said. “I said I don’t think so.”

But as soon as the nurse stepped out of the room, Tonya had the overwhelming urge to push.

“When she came back in, I said ‘You better check and see. I think I’m in labor.’”

As it turns out, Tonya was correct.

Interestingly enough, Lawrence Health Services Administrator, George Fray, told The Times Dispatch Online that, while they do have the occasional two or three emergency births a year, the hospital isn’t really equipped for handling births. To make matters even more difficult, Tonya wasn’t just having a typical emergency birth though; she was only 26 weeks pregnant. 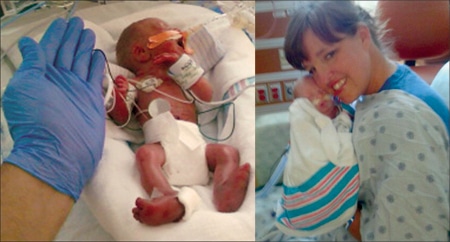 Thankfully, there were a number of people on staff that day who ended up being able to assist.

Paula Lough, who is a discharge and planning nurse at LMH, has an extensive history as an OB nurse. It was her first day back at work after having knee surgery, and she ended up being instrumental in the successful delivery of little Maddox.

The hospital’s new pediatrician, Dr. Samantha Hatfield, was on duty that day, and she was able to help out as soon as baby Maddox was born.

Chris Riggs of Walnut Ridge is a respiratory therapist who works with cardiopulmonary patients at LMH and Le Bonheur, happened to be close enough that he could respond and assist as well.

Born at 1 pound, 11 ounces, baby Maddox was tiny, but according to Julie Foster, the emergency room director for LMH, the delivery went very well, especially considering the difficulty of it.  However, the tiny preemie was intubated as an extra precaution, prior to his transfer to Le Bonheur Children’s Hospital in Memphis.

Tonya had done an amazing job, but she did suffer from some complications. She’d lost a lot of blood and she had problems with her blood pressure.

“I had to have three units of blood there at the hospital,” she said.

But within a few hours, she was stabilized enough to be transported to The Med in Memphis. She remained there for an additional the next four days and received two units of blood.

Now she, and her baby, are both doing very well. Baby Maddox is gaining in both weight and strength, each and every day. His breathing tube was removed quite a while ago, and though he is still on supplemental oxygen, he’s starting to take a bottle. If all continues to go well, he may even get to go home soon.

“We’re doing good,” Tonya said. “They have to wean him off the oxygen. Once they do that, if everything else is good, we’re hoping to go home in August.”

In the meantime, mom and baby are like celebrities at Le Bonheur hospital; according to Tonya, all of the nurses have come to meet her and Miracle Maddox.

“They said ‘We cannot believe that you had this baby at a hospital that is not even set up to have babies,’” Tonya said.

And for that, everything from the successful birth to the amazing recovery of both her and her baby, Tonya says she has the amazing staff at LMH to thank.

“It was a miracle,” Tonya said. “If it hadn’t been for them, neither of us would have made it.”

Congratulations to mom! We hope Maddox continues to do well so he can go home and be with his family.