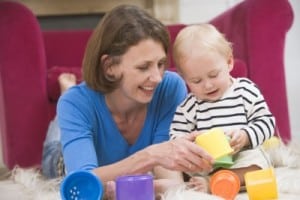 The American Academy of Pediatrics is speaking out again against children under the age of two watching TV. In their new policy statement the organization says that free play is a much better activity to help brain development in infant and toddlers than television or videos.

Children under the age of two who take part in unstructured play, according to the experts, are more creative, learn to solve problems, and develop reasoning and motor skills at an early age. The playtime also helps them entertain themselves and they do not need the assistance of a television.

The AAP said that although the market has recently been flooded with material promoted as educational videos for infants that helped with their brain development, there was no evidence to support the claim. In fact, the association warned that excessive exposure to TV or videos could hinder language development in children of such young age when they were ready to go to school.

Another indirect problem with TV viewing was that when parents watched television, it reduced their interaction with children and distracted their attention. The children were also less attentive to the play when the parents were busy watching TV.

The AAP points out that young children learn the best from interaction with parents and caregivers. They have also given a number of recommendations in their latest policy to help improve the interactive session between adults and babies.

While discourages the use of electronic media for children less than two, they are also advising that if parents do use it, they need to restrict the viewing time strictly.

The experts say that if parents do not have time to play with the kids, they should opt for supervised independent play instead of putting on the TV. For this they suggest leaving the child with a toy in front of them while you prepare dinner or giving them stacking or sorting toys on the floor while you do your chores.

“In today’s ‘achievement culture,’ the best thing you can do for your young child is to give [the child] a chance to have unstructured play — both with you and independently. Children need this in order to figure out how the world works,” lead author Dr. Ari Brown, a member of the AAP Council on Communications and Media, said.

The doctor also says that parents shouldn’t allow their children to have a television in their room. They add that if at all television viewing is allowed it should not be before bed time as it can cause poor sleep habits and irregular sleep schedules, which can lead to mood, behavior and learning problems.

The policy statement was released on Tuesday at the AAP National Conference & Exhibition in Boston and published online and in the November print issue of the journal Pediatric.