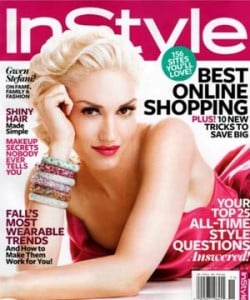 Being a fashion diva isn’t always easy, especially when you have two boys – just ask Gwen Stefani! Well known for her keen, cutting edge fashion sense that is constantly raising the bar in the fashion world, Gwen says her boys can sometimes be a bit of a fashion disaster.

“I like them to be creative and have fun. I’d love to be part of it – don’t get me wrong,” Gwen reveals in the November issue of Instyle. “Sometimes they’ll get dressed and it’s horrifying. But they often come out in outfits that are awesome.”

The hands-on mom also revealed that her own fashion sense is sometimes challenged by motherhood,

“When you have two little boys, you have to play outside. There’s no way around it. If we’re at the park, I try not to wear heels. The kids are so gigantic, it would be painful.”

So how exactly does Gwen keep up her cutting edge look while mothering her two boys, Kingston, 5 and Zuma 3?

Gwen’s hands are full with more than just motherhood these days though. The No Doubt singer is set to debut her new children’s clothing line, Harajuku Mini, for Target next month. But Gwen says she doesn’t let her work control her life.

“At work, I’ve learned how to delegate. It makes you a better wife and mom. You don’t have to be on a ladder in a warehouse, micromanaging. You can be at home,” says Gwen.

And at home, with her husband Gavin Rossdale and boys, is exactly where she wants to be.

“I love having a job where I can be in my office and look out the window and see my kids playing,” said Gwen. “The thing I’d like to do is enjoy these boys while they’re young – so I don’t regret I was working too much when they’re big and don’t want to cuddle with me anymore.”