Home » An Orgasm During Childbirth? Some Women Say Yes! 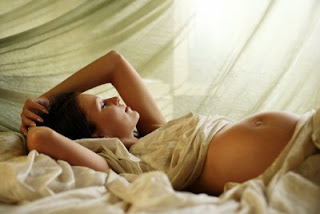 When women describe childbirth they use words like painful, excruciating and unbearable – never pleasurable and euphoric…

But Amber Hartnell of Hawaii says her birth experience was different. The mom of 2 says she experienced an orgasm during labor when she gave birth to her son in September 2005.

Amber’s husband was amazed – and also relieved – to see his wife experience such pleasure.

“It made me feel like everything was gonna be all right,” he said. “The experience didn’t have to be a traumatic, painful experience. It could be an experience of ecstatic joy.”

The couple even allowed the birth of her second child to be filmed as part of a documentary titled “Orgasmic Birth.”

“It is, as we say, the best-kept secret. I believe by women having such terrible fear. … Women aren’t getting the choices they need, to make the experience as easy as possible.”

The secret? Intimacy. Another couple, who also experienced the same thing spent much of their labor kissing and caressing.

“The physical touch and the nurturing was just really comforting to me,” Tamra Larter said, adding that she ultimately experienced an orgasmic birth. “It was happening, and I could hardly breathe, and it was like, ‘oh, that feels good.’ That’s all I could say really.”

“When the baby’s coming down the birth canal, remember, it’s going through the exact same positions as something going in, the penis going into the vagina, to cause an orgasm,” Northrup said. “And labor itself is associated with a huge hormonal change in the body, way more prolactin, way more oxytocin, way more beta-endorphins — these are the molecules of ecstasy.”

Number 2 is coming in a couple of weeks – sign me up!