Home » Angelina and Her Crew Visit The London Aquarium

Angelina Jolie was spotted yesterday taking 4 of her kids; Shiloh, Zahara, Knox and Vivienne to the London Aquarium. 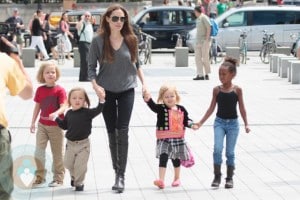 Just like many moms, the actress has been doing her best to her crew occupied during the Summer vacation. Last week she rented out a theater and treated all 6 of her kids to a private screening of the new Harry Potter movie.  The lucky bunch also visited Malta this Summer where they swam with dolphins.

The Jolie-Pitt crew are touring the world to stay close to their dad while he films filming World War Z.  Next up will be Hungary and then Glasgow, Scotland.