Home » Another Mom Unaware She Is Pregnant Until The Baby Arrives! 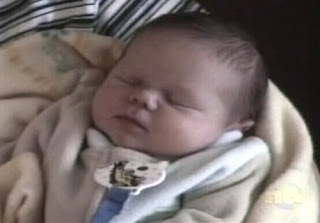 Life had been normal for Juanita Stead, 36, until she started to feel a bit of back pain while attending a New Years Eve Party on Dec 31st.

“It was just a little pain in my back and I just ignored it as the day went on,” the new mom said, when recalling her very memorable end to 2008.

Her brother-in-law, who is a paramedic, told her that it sounded like she might be passing a kidney stone.

She went to hospital by ambulance and was accompanied by her brother-in-law and her husband Terry, 35.

In the emergency room, she was put through a barrage of tests as doctors tried to figure out what was going on.

“They done all kinds of tests — they done blood work and everything else,” Stead said.

Juanita told CTV’s Canada AM, she wore her everyday clothes had no sickness and got her regular menstrual period every month. The baby was a real surprise!For some reason this happens all of the time, I have no idea how…