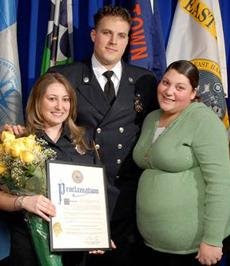 I can’t imagine delivering a baby at home – let alone breech, but that is exactly what happened Deborah Guidice and she is thankful she had the help of 911 dispatcher Christine Springer.

While going to the bathroom on January 6th, 30-week pregnant Deborah Guidice “felt something big come out of her, and then she reached down and felt feet,” the new Grandma recalled. Deborah called 911, reaching Christine Springer, who who coincidentally is herself 31 weeks pregnant.

Even though the Manorville Ambulance Company had been dispatched, Christine knew that the partially breech-born child could not wait the five to six minutes it took the EMTs to arrive, so she instructed Deborah to have Dolores move from fetal to squatting positions as her mom guided the baby out with her hands. After frantic pushing by Dolores, baby Nevaeh emerged, but silently, with the unbroken umbilical cord wrapped tightly around her neck.

After being prompted by a computerized medical procedure program Christine calmly advised the pair to “Stick your finger under the cord without stretching it tight, and carefully pull it over the baby’s head,” Pleading, “Breathe, baby, breath,” Deborah followed her guidance, and then further instructions to clean off the child’s mouth and nose to facilitate breathing.

It worked. No crying could be heard over the phone but Deborah related that Nevaeh was breathing. “The baby coughed, and then just opened up one eye and looked at me,” Deborah said later. The EMTs arrived a moment later, and mother and child were conveyed to the hospital.

Nevaeh was born at three pounds, nine ounces and despite initial jaundice, is doing well.