Silicon Valley giants Apple and Facebook are making an “investment” in their female employees with a game-changing health perk: egg freezing. 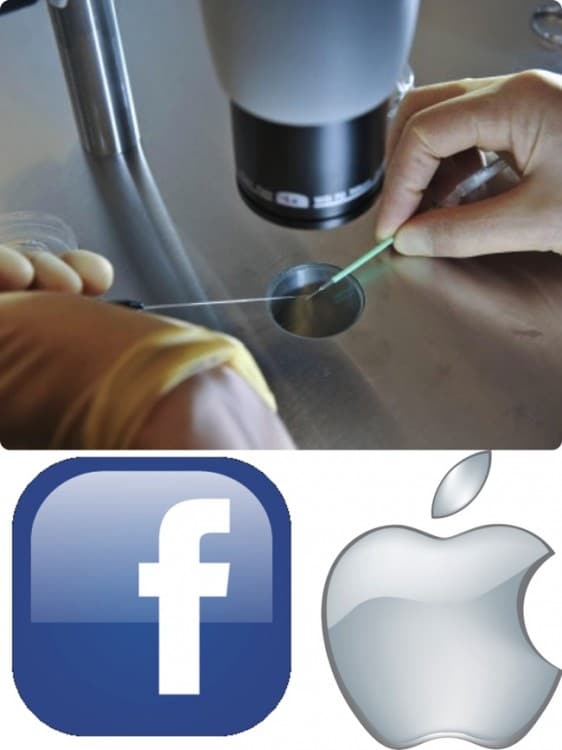 Although there’s no guarantee that the women will still be able to have families with their frozen eggs, experts say that the earlier a woman starts freezing her eggs, the greater her chances of success will be. By offering the benefit to women, the companies are giving women the chance to start that freezing sooner, thereby giving them the means by which they can essentially carve out their careers before giving birth.

In fact, some experts are calling egg freezing the key to “leveling the playing field” between men and women…because, until freezing, women were always fighting their biological clocks when it came to making important life choices, like when and where to start and pause from their careers.

Phillip Chenette, a fertility specialist in San Francisco, says the coverage could be viewed as sort of a “payback” for the commitment women are making to their careers during their key childbearing years – a payback that women find value in, if you look at a 2013 study in which women claimed to have felt “empowered” after freezing their eggs. Probably because these women that know they want kids someday “can go on with their lives and know that they’ve done everything that they can,” Chenette said.

Though there are companies out there that will pay for the very expensive procedure when there is a medical necessity, the two companies are thought to be the only ones doing it for non-medical reasons. This new coverage – which can add up to a benefit of at least $10,00 for each round, plus $500 in annual storage fees – may very well give the two companies a leg-up when it comes to retaining high-powered, career-minded women.

Of course, big benefits to procure and retain talent isn’t a new concept, but these two companies seem to be paving the way when it comes to family and wellness-oriented benefits. In fact, both already offer a slew of perks to their employees, including fertility treatment and adoption benefits. For example, Facebook gives new parents in the company $4,000 in so-called “baby cash” to use it however they like.

But, regardless of the benefits already in place, these two companies seem to be very progressive regarding their female employees, which is evidenced by their willingness to pave the way when it comes to egg freezing – each going about it in their own way.

Apple is said to be covering the costs under its fertility benefit, and Facebook covers it under their surrogacy benefit. However, both companies are covering up to $20,000 in benefits, and women that work at Facebook have already started to take advantage of the new coverage. Women who work for Apple are expected to have the opportunity to start taking advantage of the coverage beginning January of next year.

Of course, there is the question as to whether or not the benefit will end up being beneficial for the companies in the end. Though it may likely encourage women to stay with the company longer and cut down on recruiting costs, as well as cut back on pregnancy costs and even possibly donor egg expenses later on down the road, it is something that companies will have to consider.

There are also some that worry about the public relations implication of the benefit; in the most cynical of situations, egg-freezing coverage could be seen as a way to entice women to “sell their souls” the company by giving up their childbearing years for hope of a promotion.

“Would potential female associates welcome this option knowing that they can work hard early on and still reproduce, if they so desire, later on?” Glenn Cohen, co-director of Harvard Law School’s Petrie-Flom Center for Health Law Policy, Biotechnology, and Bioethics, said in a blog last year. “Or would they take this as a signal that the firm thinks that working there as an associate and pregnancy are incompatible?”

While this could be an issue, most believe that women will simply be grateful that the coverage is there. Some of them may not ever even return for their eggs, simply because they might change their mind about starting a family, or they may end up getting pregnant naturally, but for those that do decide they want a family later in life and struggle to conceive, they will already have eggs available. And, with more and more women holding off starting their families already, the coverage really could be seen as a positive thing, all the way around.