Home » Are You Feeling Fertile?

There is a new way to predict when you are ovulating. I never trusted these things because when we were trying to have our son nothing worked. I have a 3 month cycle so these gadgets can usually only help those who normally on time. This “gadget” is useful to women like myself because it doesn’t go by dates, it uses body chemistry. 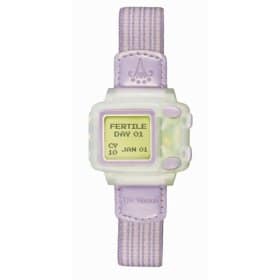 The OV Watch uses chemicals found in your sweat to predict when that little egg is roaming free. Here is what the official site says:

“Researchers in the late 50s and early 60s noted that numerous salts (chloride, sodium, potassium) in a woman’s sweat fluctuated in relation to the menstrual cycle. Chloride levels are low at the start of the menstrual cycle and peak three times during the cycle (see graph below). Using a patented biosensor, OV-Watch detects a baseline chloride ion level for each woman and then accurately predicts ovulation based on the timing of the first peak. The OV-Watch detects the chloride surge 3 days prior to the estrogen surge, 4 days prior to the LH surge and 5 days prior to ovulation, making it an earlier predictor of ovulation than any other chemical surge during the month. During the clinical trials for FDA approval with Dr. Arthur Haney at Duke University, approximately 3 out of 4 women received the full 5 day notice of ovulation while only 1 in 6 women were given more than 12 to 24 hours notice with urine tests or LH kits. For women trying to conceive, knowing the days before ovulation not only lowers the stress level for her and her partner , but it increases her chances of getting pregnant.”

Here is how you use it:

“OV-Watch® is worn on the woman’s wrist while she sleeps. Women start wearing OV-Watch® on the 1st, 2nd, or 3rd day of their menstrual cycle and wear it through ovulation. It measures a woman’s changes in her chloride ion levels that are secreted in perspiration every 30 minutes and records up to 12 readings per period. OV-Watch’s patented technology detects the chloride ion surge and alerts the woman to FERTILE DAY 1, FERTILE DAY 2, FERTILE DAY 3, FERTILE DAY 4, OVULATION DAY 1, and the day after. It is the ONLY device of its kind that can give you the 4 days BEFORE ovulation. That can make all the difference when you are trying to conceive. OV-Watch® can be used for this pregnancy and subsequent pregnancies, and unlike urine based products can be shared with a friend after you are pregnant.”

I love the concept, if it works women would definitely wear a “watch” than pee on a stick every morning. You still need to buy refills just like the pee ovulation testers, but this device may give you more notice. Watch $99, refills $39/month