Five-month-old Ricky Kimber is one of the youngest ever to participate in a study that will hopefully help scientists better understand how babies learn at a young age. It is their hope that, through this understanding, they can uncover clues in how autism develops. This, of course, could help provide earlier intervention to children with the still largely misunderstood neurodevelopmental disorder. 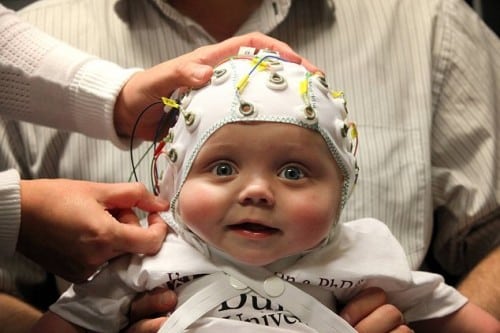 “While there is no cure for autism, intervention can take place to assist the condition,” says Dr. Vincent Reid, psychologist at Durham University, lead researcher on the project. “This research should help us to possibly detect the condition at an earlier age.”

For the preliminary studies, Ricky was escorted to the Durham University by his parents, Rachel Mitchell and Doug Kimber. In the unique experiment, Ricky “walks” through a tub of water. Scientists then show Ricky images and videos of people walking. While watching the videos and images, Ricky sports some very interesting head gear: a cap full of sensors that will measure brain activity. Dr. Reid explains how this information will help in their goal.

“How babies learn best is important for parents and carers and also gives a better understanding about how the brain reacts to social information, something which is crucial in the early detection of autism,” he said. “We are not doing any medical testing in this study, but purely looking at babies’ brains from an academic point of view.”

But Ricky isn’t the only infant that the scientists plan to share their lab with; they hope to sign up at least 40 more babies, 10 weeks old or younger. All infants included in their studies will be constantly supervised by their parents. Like Ricky, the infants will “walk” in a small bath of water, using their “walking reflex.” Some will watch the same images as Ricky, others will not. All will be tested to see how their brain works during the experience. While not being tested for autism, specifically, the research may help improve autism detection in the future.

“Ideally, we  are looking for parents of babies aged two to three weeks, who have had a natural birth, to contact us now,” said researcher Katharina Kaduk. “The research will take place when they are around 10 weeks old.”

While it may seem a little scary to offer an infant up for testing, Ricky’s parents say that the entire process is non-threatening, and completely pain free. They also say that they feel strongly about Ricky’s part in the research. They hope that it will help other children in the future. invasive, and they feel that what they are doing could help other children in the future.

“It is important to have volunteers, because without research, we cannot learn about our children and develop and improve our knowledge,” she said. “But the baby lab at the university is  a child-friendly environment. It is not the traditional image of a laboratory full of wires and test tubes.”

And Ricky’s parents aren’t the only ones that are enjoying the experience – both Ricky and the researchers seem to enjoying themselves.

“I am delighted Ricky has been able to help in the research,” Kaduk said. “And he certainly seems to enjoy the attention.”

Parents that are interested in participating are encouraged to contact Durham University in the UK, a country where approximately one in 100 children are diagnosed with an autism spectrum disorder.

“It is important to stress that the procedure is non-invasive,” Dr. Reid expressed. “When babies come into the lab to take part, they will be held while ‘walking’ in the bath. After that, they will be fitted with a little cap with sensors on and shown computer images. The baby stays with its parents and we simply record what the baby is doing and what’s happening inside his or her brain.”