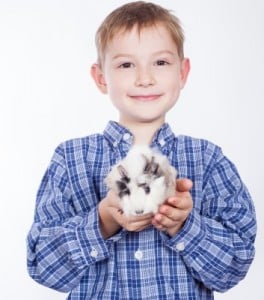 The use of therapeutic pets has become increasingly popular over the years, and for good reason. While positive studies are rare, those that have been done have shown that owning and being around an animal can have calming effects on both adults and children with various disabilities. A new study from the University of Queensland, Australia has added to those positive studies after taking the time to investigate the effects of being near an animal on children with autism.

This information coincides with former studies that have suggested people are more likely to receive friendly advances from strangers while walking a dog than when walking alone; studies on individuals with smaller animals, like turtles and rabbits, have produced comparable outcomes. When paired with their own study, it’s not difficult to see why researchers from the University of Queensland are suggesting that teachers, therapists, and other adults that work with autistic children consider the ‘social lubricant’ of animals crucial to the healing and development process. Probably the most notable situation in which this would be beneficial would be in the classroom, the authors said.

“For children with ASD, the school classroom can be stressful and overwhelming e3nvironment du to social challenges and peer victimization,” the authors told Medical News Today. “If an animal can reduce this stress or artificially change children’s perception of the classroom and its occupants, then a child with ASD may feel more at ease and open to social approach behaviors.”

However, even parents can reap the benefits of animal therapy for their children. Even if the animal isn’t the ‘typical’ therapeutic animal, parents can use pets to help calm their children and improve social interaction at home. We have a fish and a cat, and it’s just amazing to see how calmed my son becomes when the animals are within sight. In fact, we’ve witnessed him going from an aggressive outburst to calm after spending some time interacting with his fish. It’s such a simple thing, but for some reason, it really does seem to help.