Home » Babies can Hear and Learn Words in the Womb 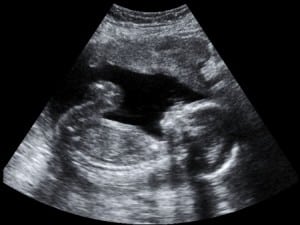 At about 18 weeks into your pregnancy, a baby develops the ability to hear sounds.  This is why just hours after being born babies can actually recognize their mother’s voice.  Now, a new research has found that babies can not only hear in the womb but they also have a memory of the words they have heard!

Study co-author Minna Huotilainen, a docent at the University of Helsinki’s Finnish Center of Excellence in Interdisciplinary Music Research said,

“We believe this shows how well the brain at this age adapts to sounds. It is a sign of very early language learning, or adaptation to the sounds they heard. A newborn baby is not an empty canvas, but has already learned how his or her mother and other family members speak.”

The research findings are novel because inside the womb, baby brains are still developing and the connections that are needed to process the information received are still in their formative stage. For this reason, it is incredible that babies can remember any sound they hear before they are born.

“There is already some evidence that fetuses can learn, and that babies can remember songs or passages of speech from the fetal period,” Huotilainen said.

The research was conducted on Finnish expectant moms by exposing the unborn babies to one single word “tatata” — that means nothing in the Finnish language.

“It is a so-called ‘pseudoword’ that is important for research. It has three syllables, and we chose such a long word to make it challenging for the small brains to find the changes and give them something difficult to learn,” Huotilainen said. “Such a word could exist in Finnish. It follows all the rules of the Finnish language.”

Half of the 33 women in the study listened to the recording of the word from 29th week of pregnancy till birth of their baby. Sometimes the recordings presented the word with a different middle syllable (“to”) or pronounced differently.

After birth the researchers tested the activity of the newborn’s brain on hearing the word. They found,

The researcher believes that babies might be able to learn words, in the later weeks of pregnancy, when the brain has developed quite a lot.

Patricia Kuhl, a speech researcher and director of the University of Washington’s NSF Science of Learning Center, praised the study. “The fact that learning from frequently presented sounds occurs while infants are still in the womb means that language learning does not begin on Day 1 at the moment of birth, but while the infant listens to sounds in utero. It’s really quite amazing that the fetal brain has that capacity.”

What is important is that this research makes parents aware that babies can hear and may even learn the words that you frequently use. And new moms can speak to their babies all they want.

“Be aware that the fetus can hear something from the outside world and learn from it,” study co-author Huotilainen said. “Speak during your pregnancy. You can speak to other people or to your fetus if you like.”

The study has been published in this week’s journal Proceedings of the National Academy of Sciences.